Extremely challenging is the best way to describe this climb we did to reach the top of Mount St. Helens, an active volcano in Washington! Now for those who have never heard of this volcano, it is well known for its disastrous eruption that occurred in 1980. The Atlantic magazine did a great article about this eruption which you can view here…there are lots of photos and animated images showing the explosion and aftermath. So according to our research, it started with an earthquake causing the north side of the mountain to slide off and create the largest landslide recorded. The volcano itself then exploded breaking off a large part of the top (reducing the elevation of the mountain by about 1300 feet) and spewing out a mix of hot gas and volcanic matter into the surrounding area wiping out forests and melting snow/ice which in turn made a massive flow of mud slides. In addition, there was so much ash in the air it reached nearly 12 states. This devastation killed 57 people and caused damage to hundreds of square miles. It is considered the most significant volcanic eruption in U.S. history, and it is really scary to think…but it is still rumbling, making another eruption a very real possibility!

Now you are probably wondering, why would we ever want to climb Mount St. Helens? Well, we thought it would be one of those once-in-a-lifetime unique experiences…and we can definitely say it was in many ways. Though we have to admit, this climb nearly defeated us because we were not as prepared as we should have been. The challenges started when we had to purchase our online climbing permits from the Mount St. Helens Institute which only became available to purchase in February because they only allow 100 climbers per day from May to October. We thought it would be fairly easy to secure them if we go online the first day the permits were available, but the site crashed when the sales opened at 9 am. There were too many people trying to access the site at the same time…too many meaning about 11,000 people according to the local news! It was the largest demand for permits they had ever experienced. They had to postpone the sales for several weeks while they fixed the site, and we patiently waited, hoping we could get another chance on obtaining permits. Luckily, on our second try where we literally had our computer ready to purchase the minute the site reopened, we secured two permits for July. Then we were on our way!

Note: This post is a lot longer than our usual posts, so we’ve separated the photos with more text describing the different parts of the climb. We hope you enjoy! 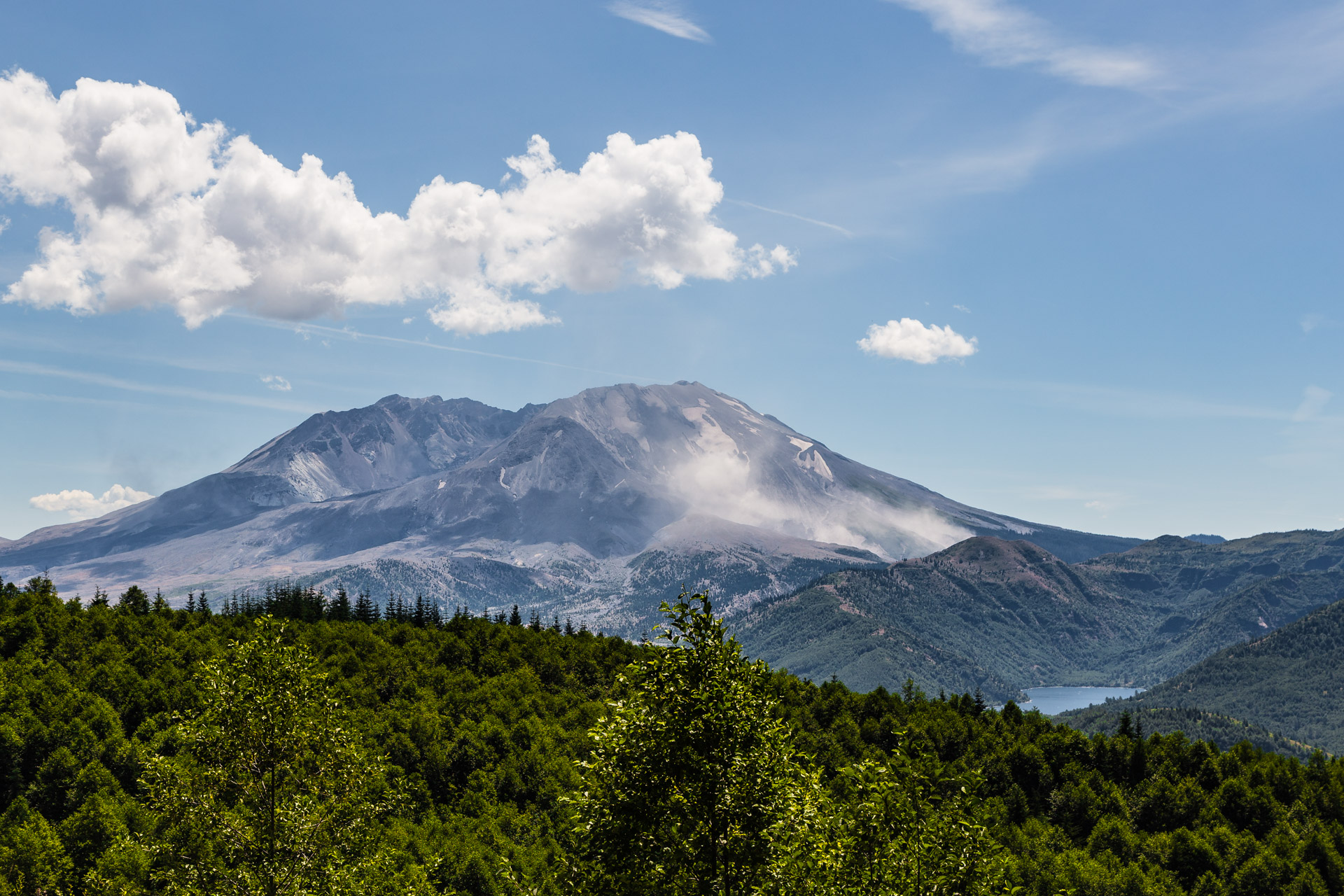 Located in the Gifford Pinchot National Forest near the Washington/Oregon border about four hours away from Seattle, the Mount St. Helens Monitor Ridge Trail is a 10 mile non-technical climb. Meaning, you do not need technical climbing gear like ropes, but it involves scrambling over rocks. The climb gains 4500 feet in five miles to the summit which is at 8365 feet of elevation. The first two miles starts with a nice moderate hike through forests and as you gain 1000 feet, you start to see some spectacular views including one of Mount Hood…another volcano located in Oregon! 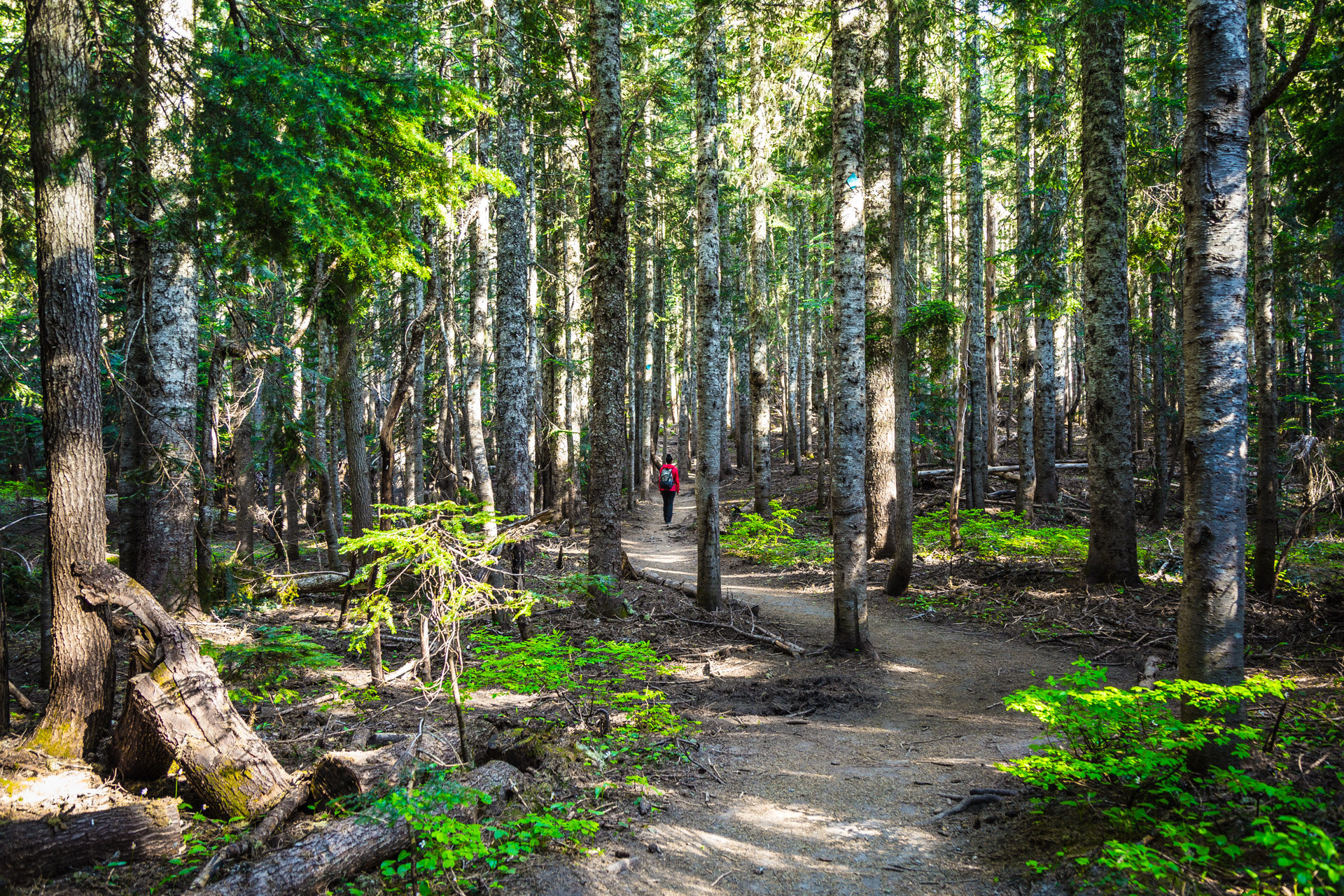 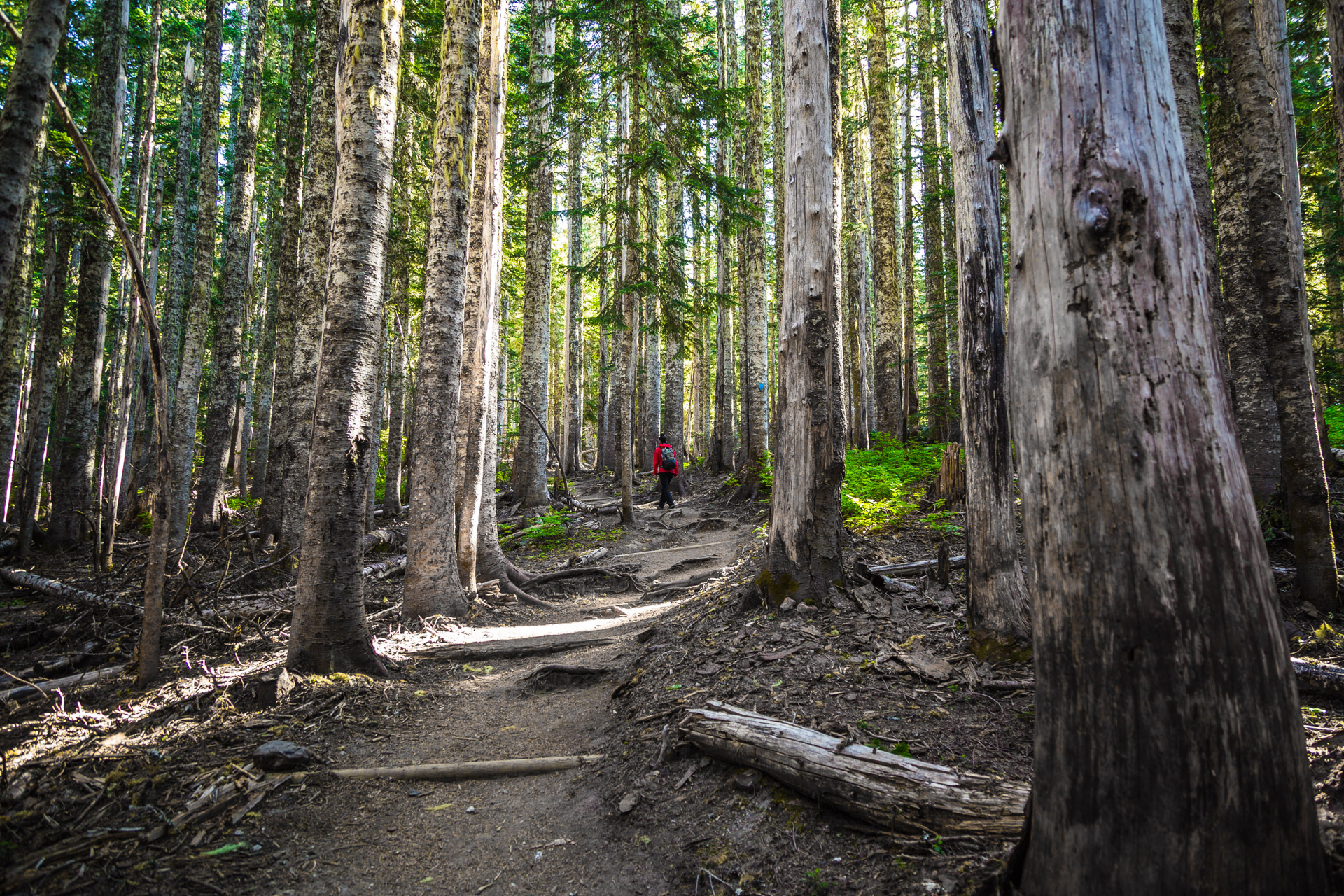 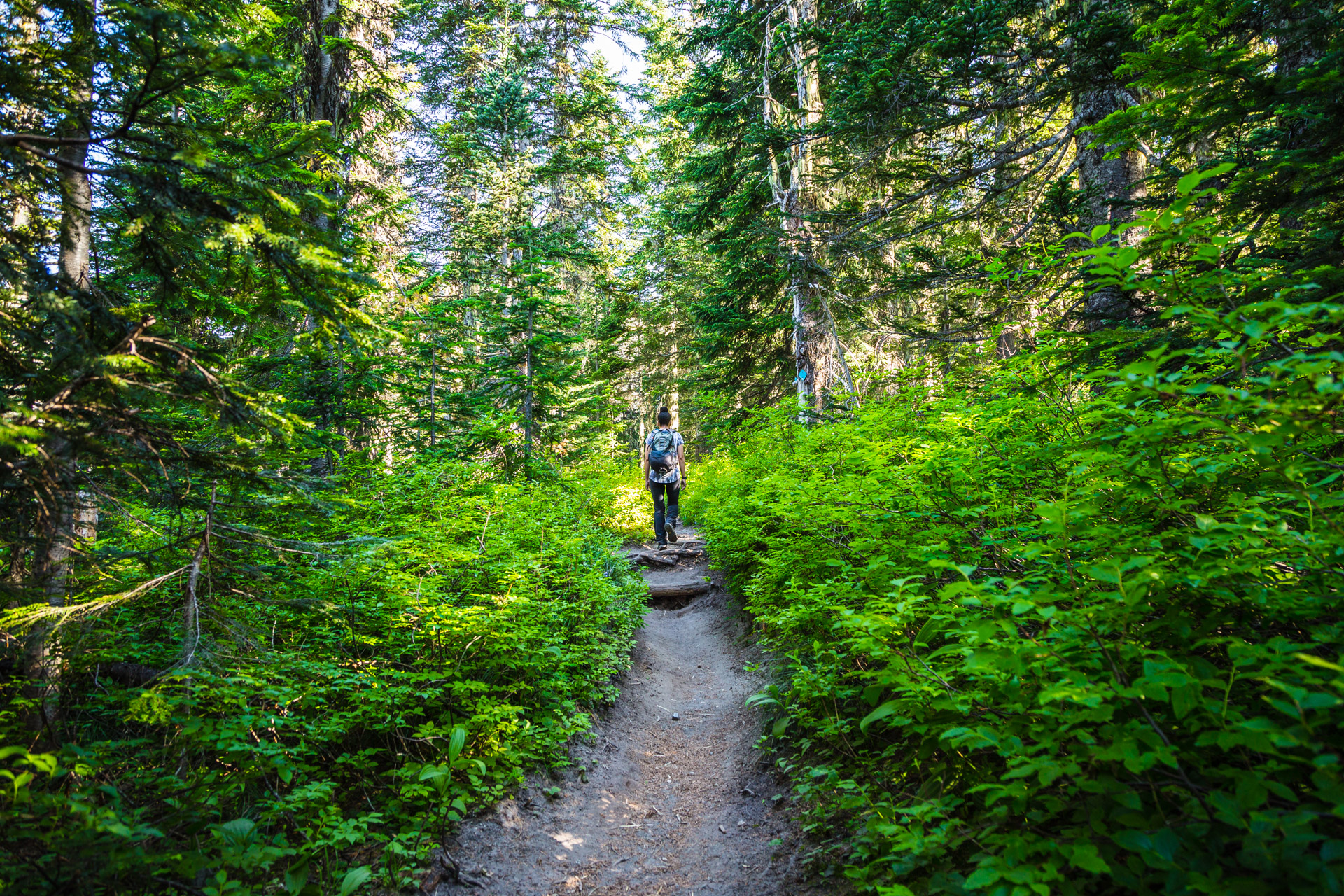 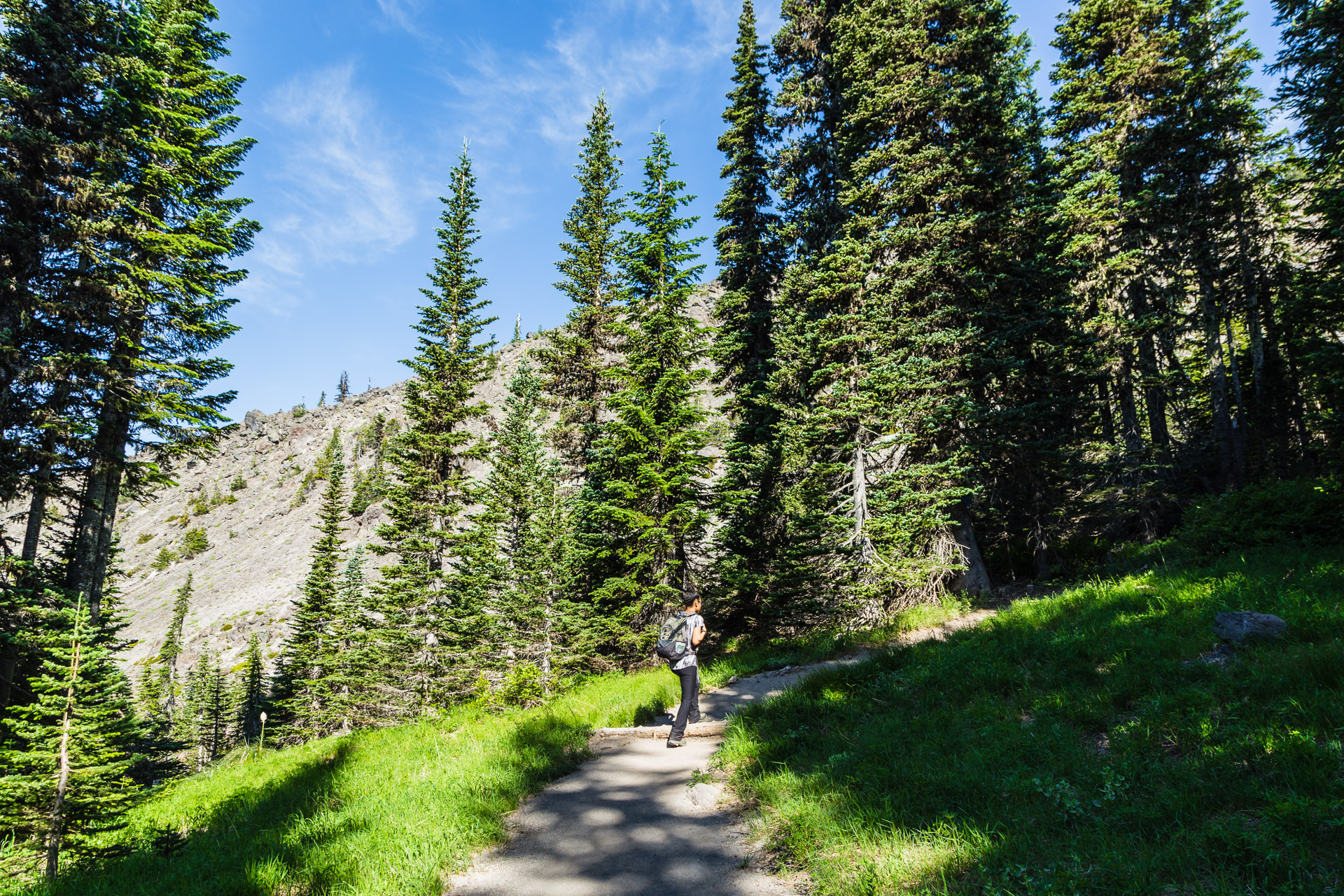 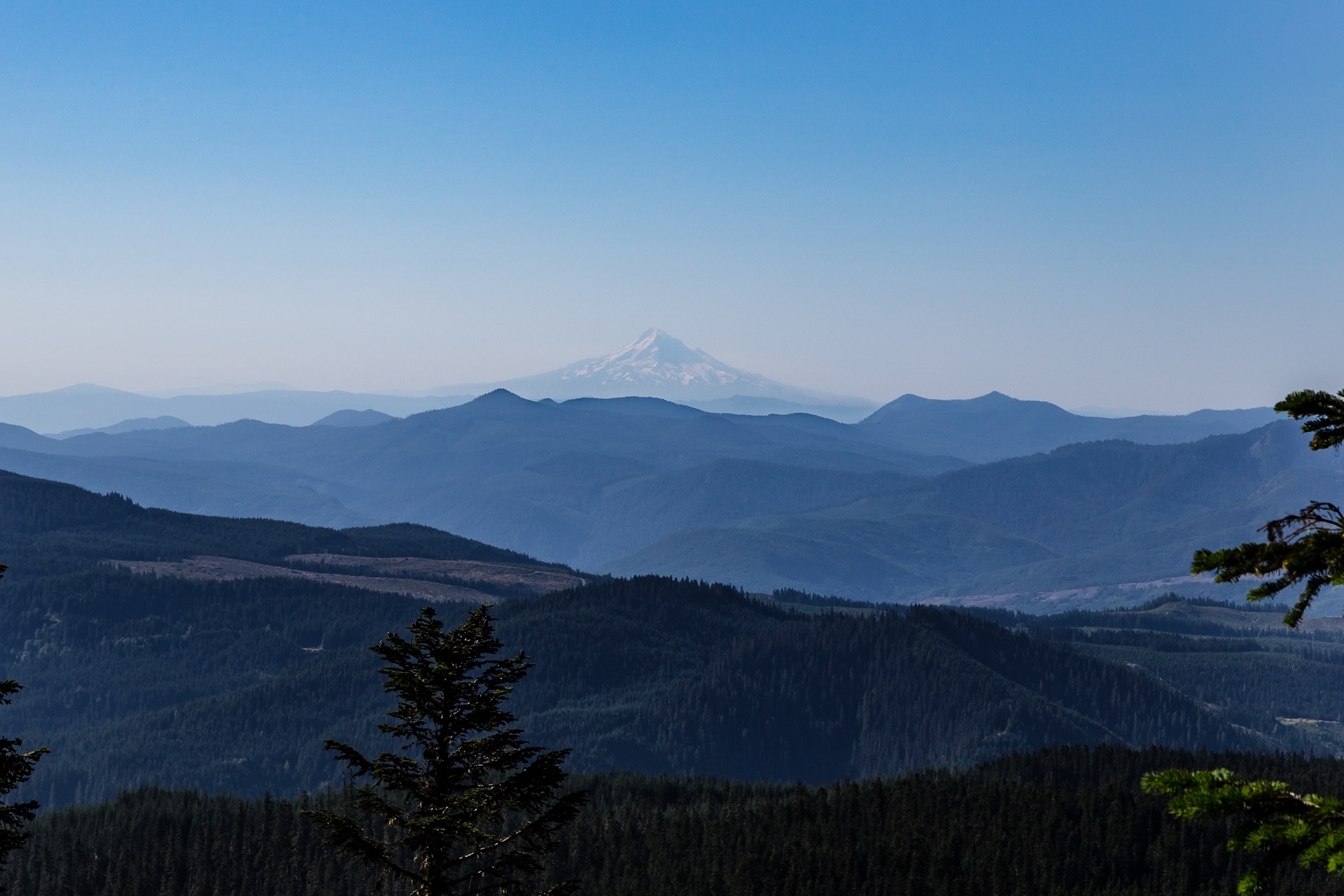 The trail then ascends to Monitor Ridge, a more strenuous part of the trail in which you have to climb 2500 vertical feet through boulder fields. This is where things became really difficult for us because the boulder fields are not your usual rock fields! These gigantic boulders are covered with ash pumice that are hot to the touch and shred your hands if you slide off them, making the scrambling part extra challenging. Gardening gloves are recommended which we had, but decided not to use. This section of the hike took us over three hours because it was like an uphill obstacle course only marked by wooden poles to guide us. The sunny day also didn’t help because we were exposed for a very long time, but the beautiful views of the mountains including Mount Adams definitely kept us going! 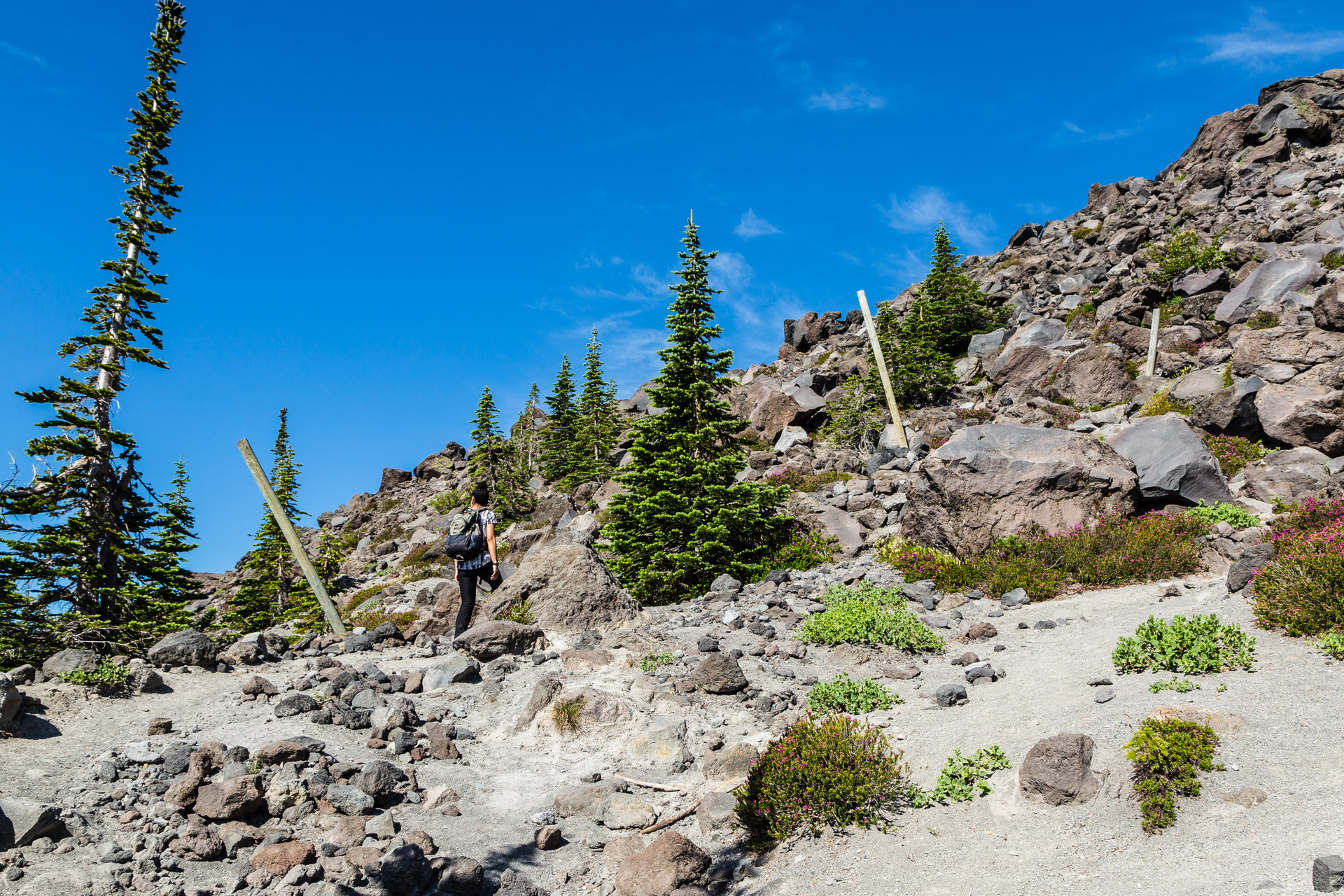 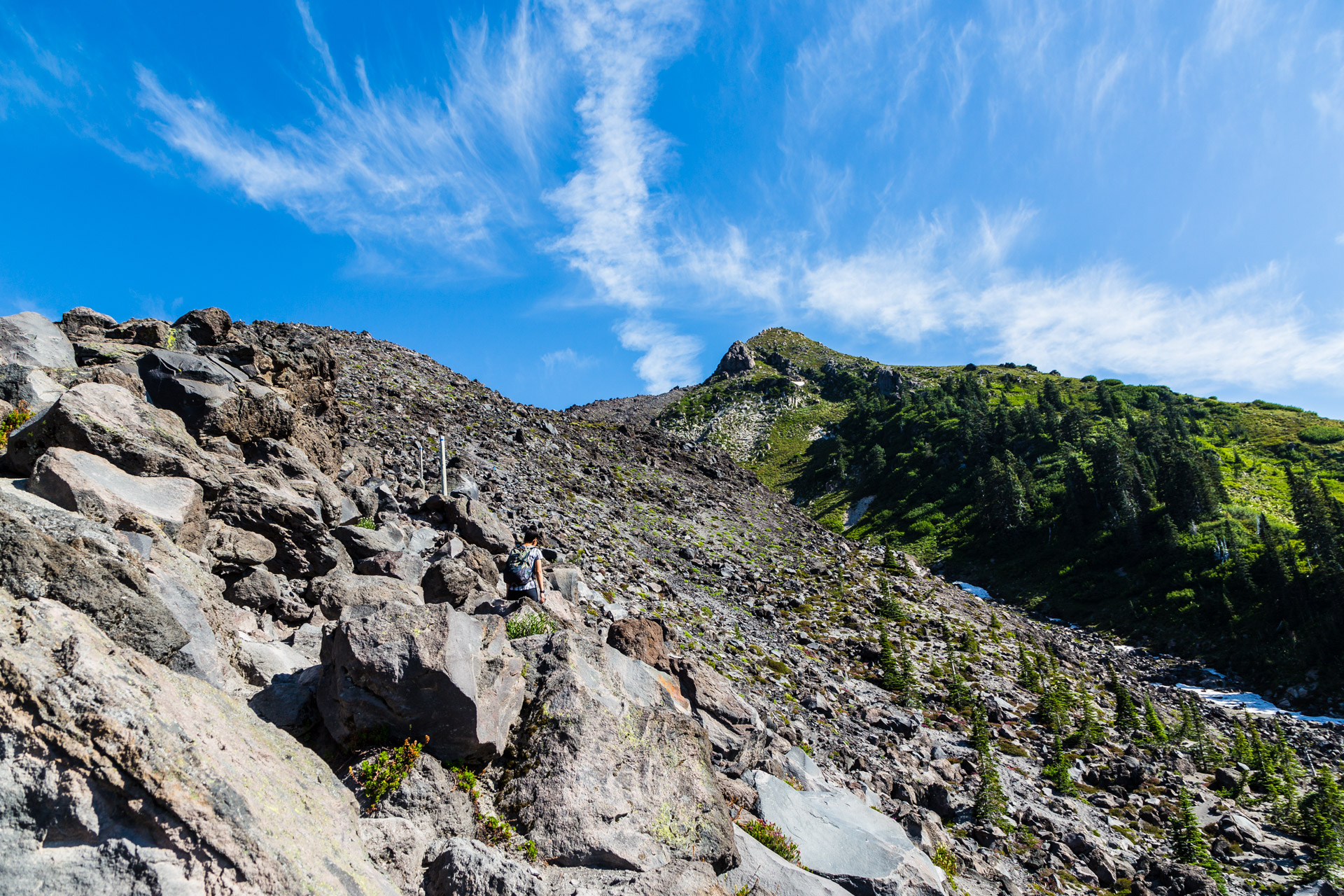 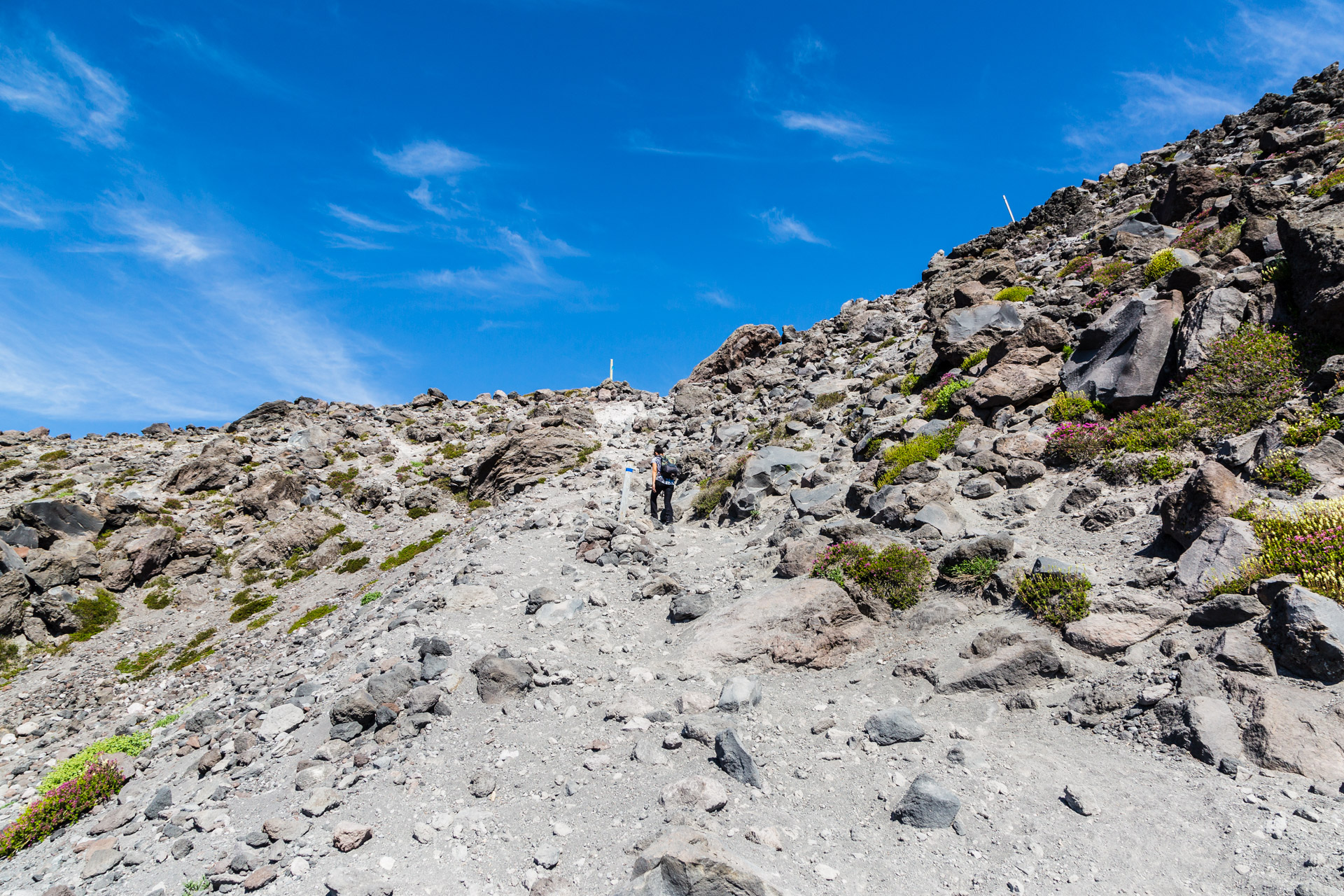 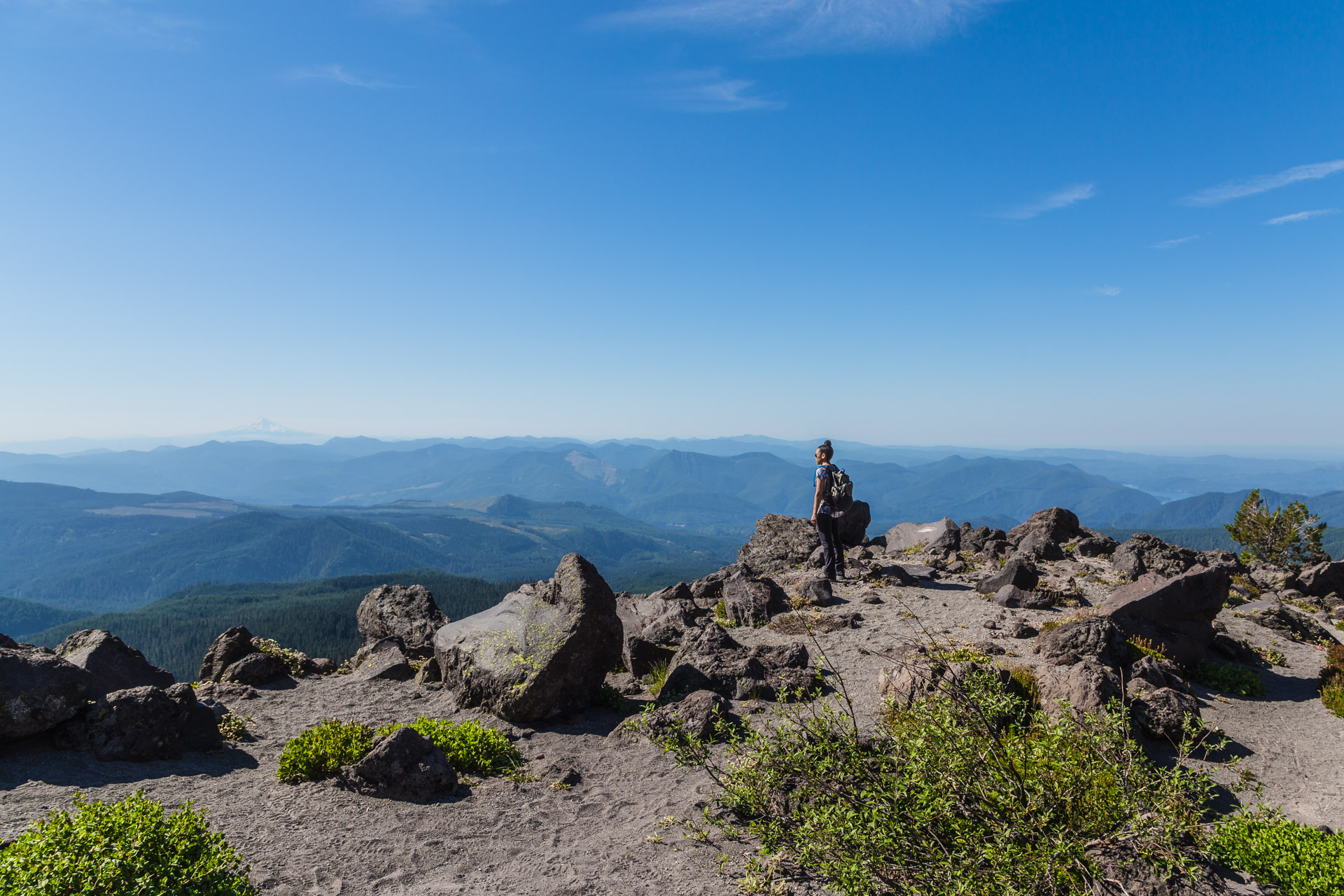 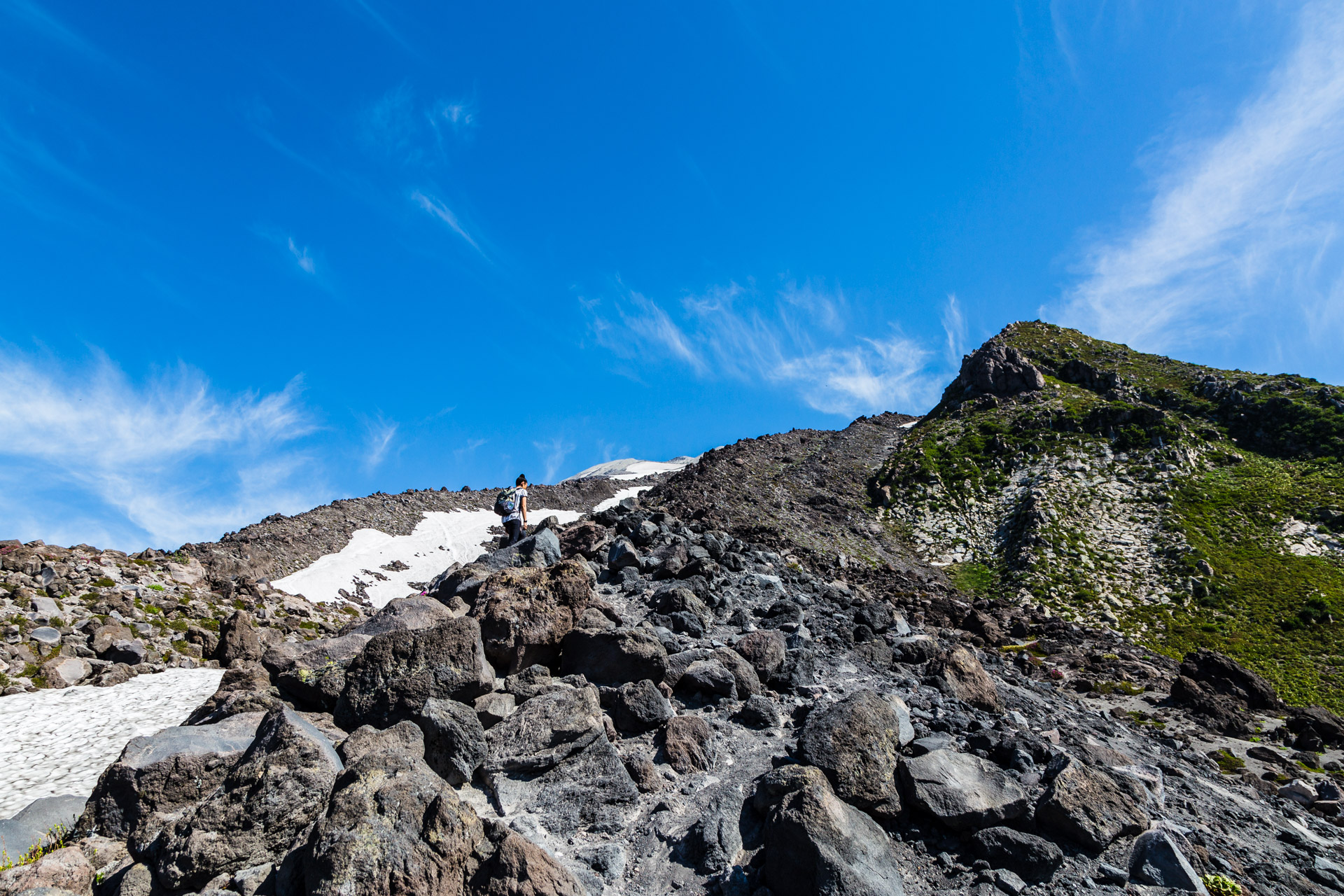 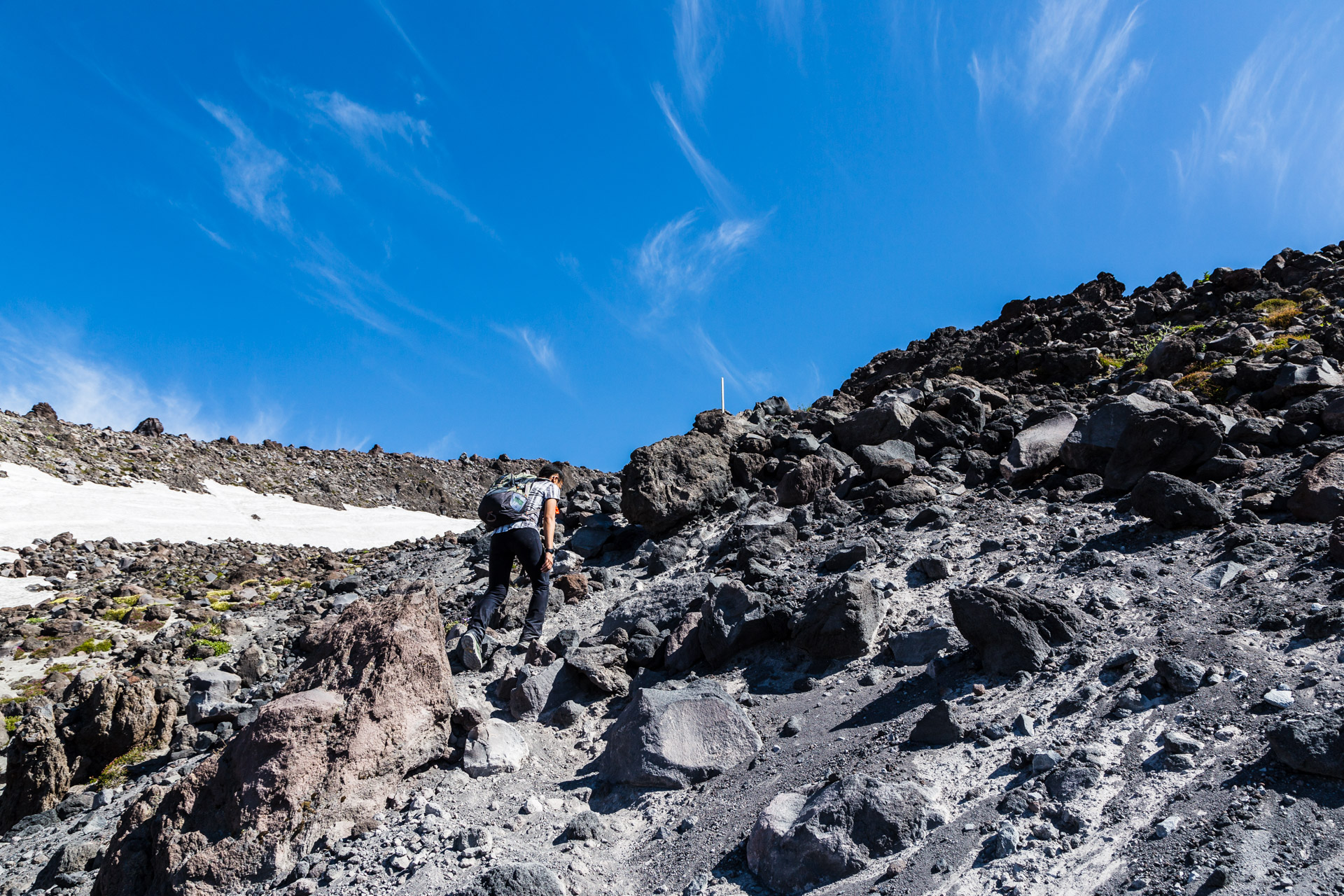 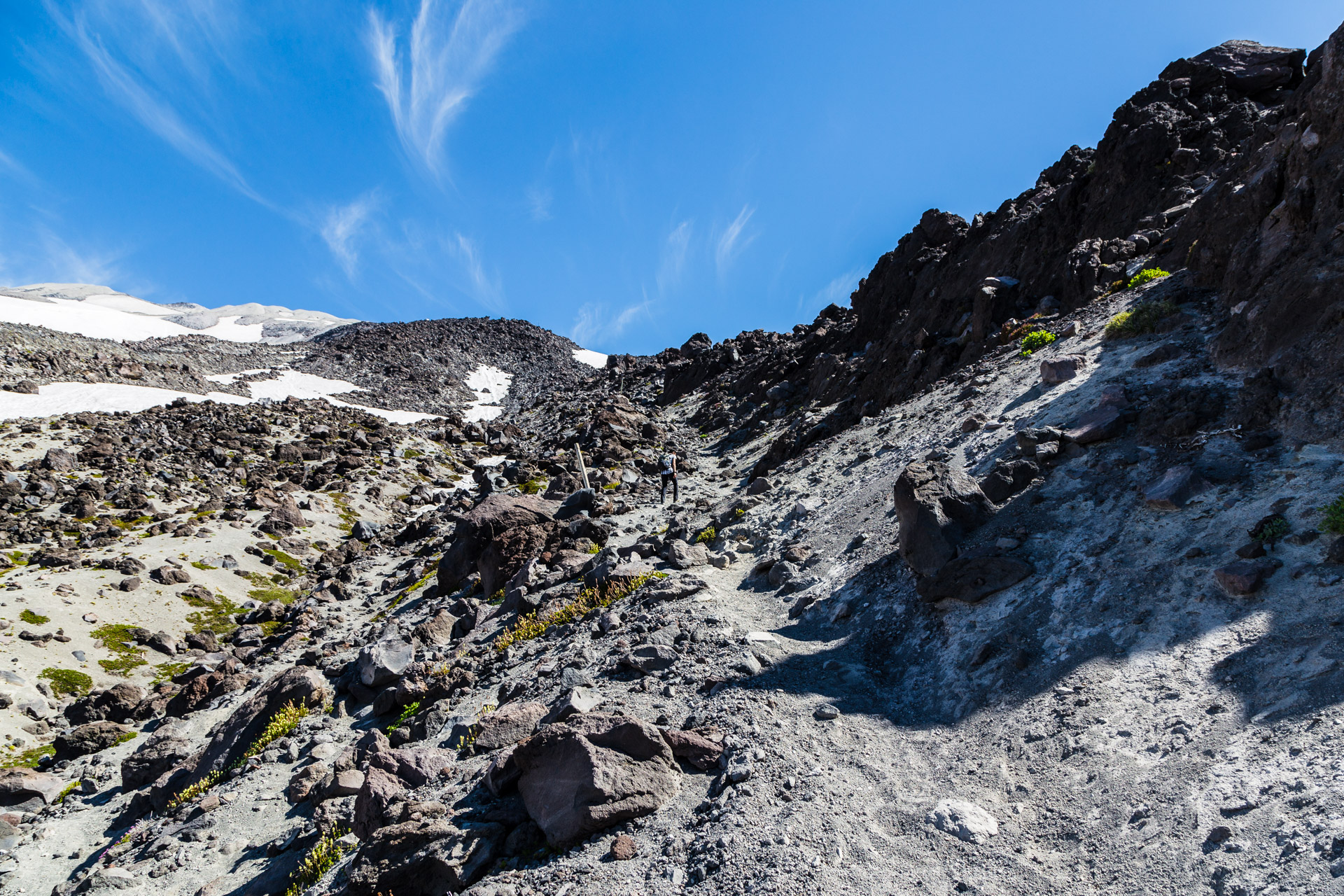 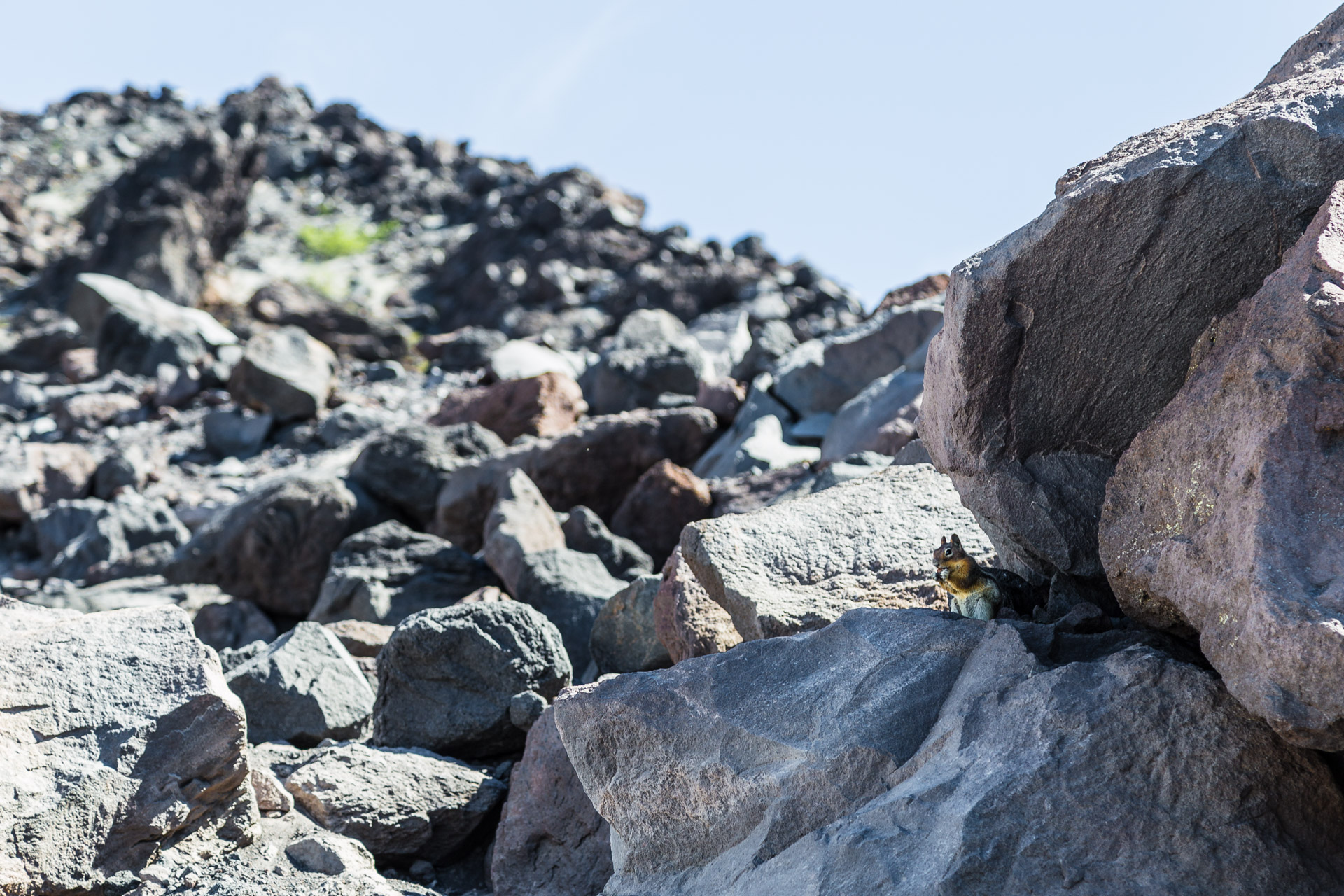 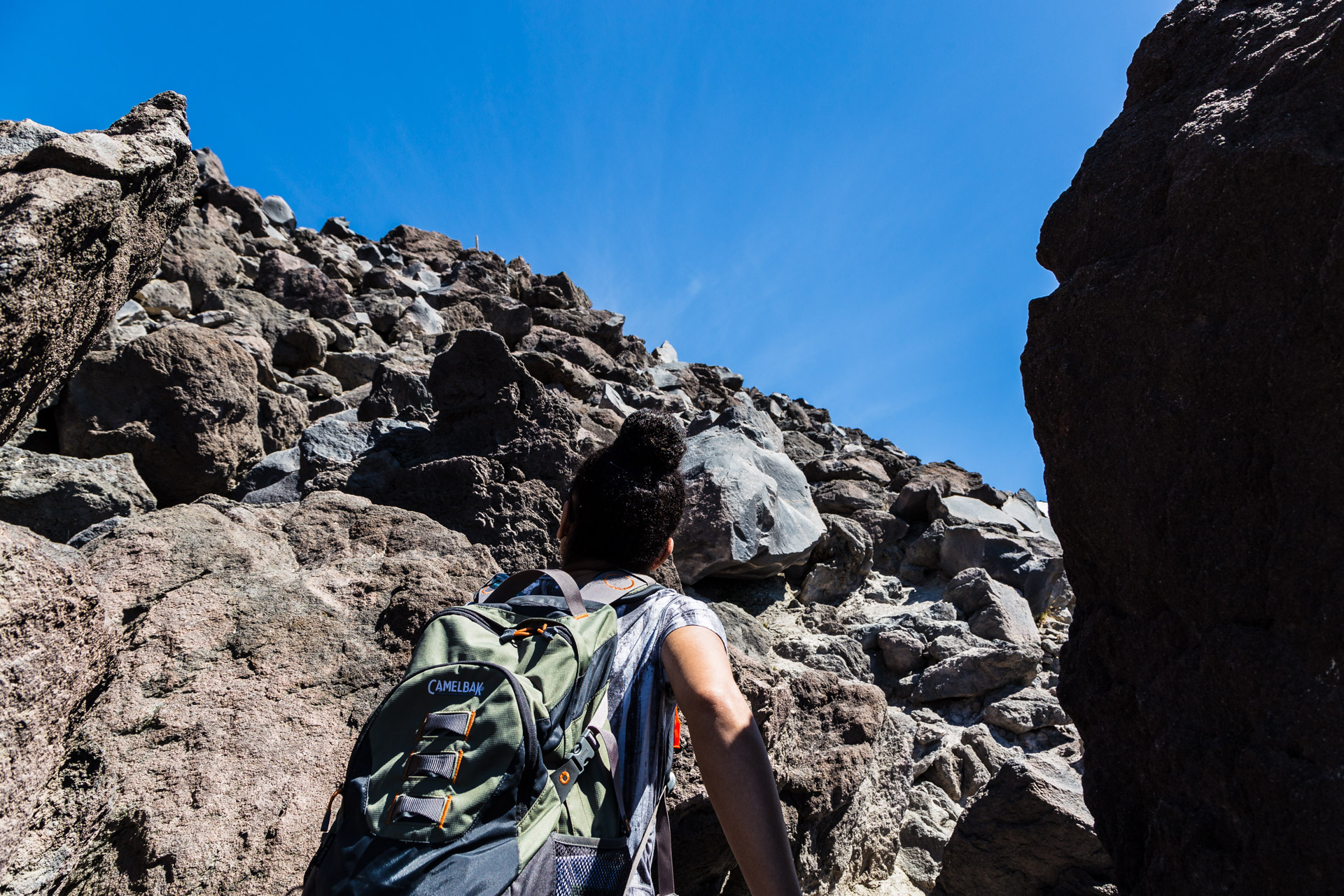 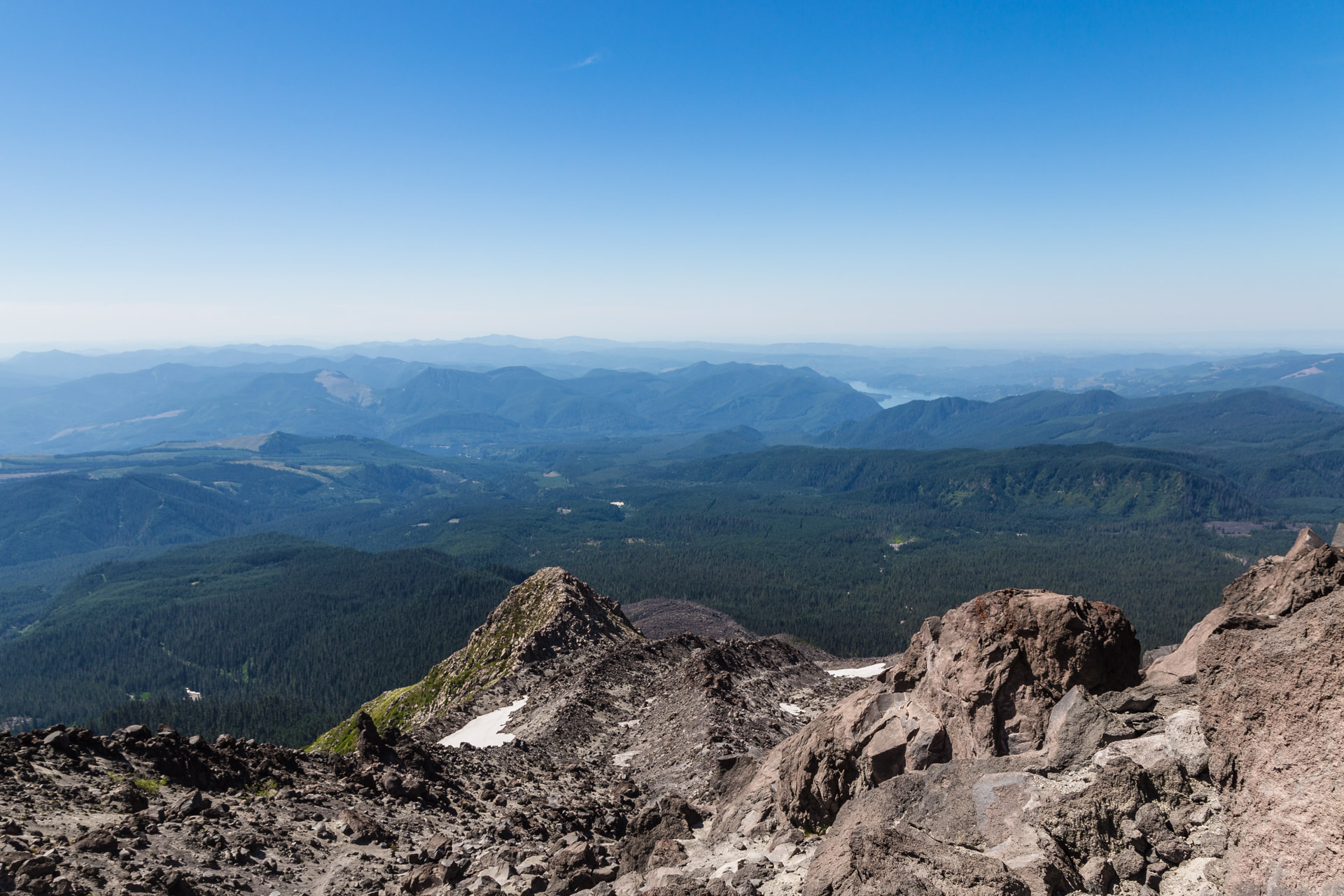 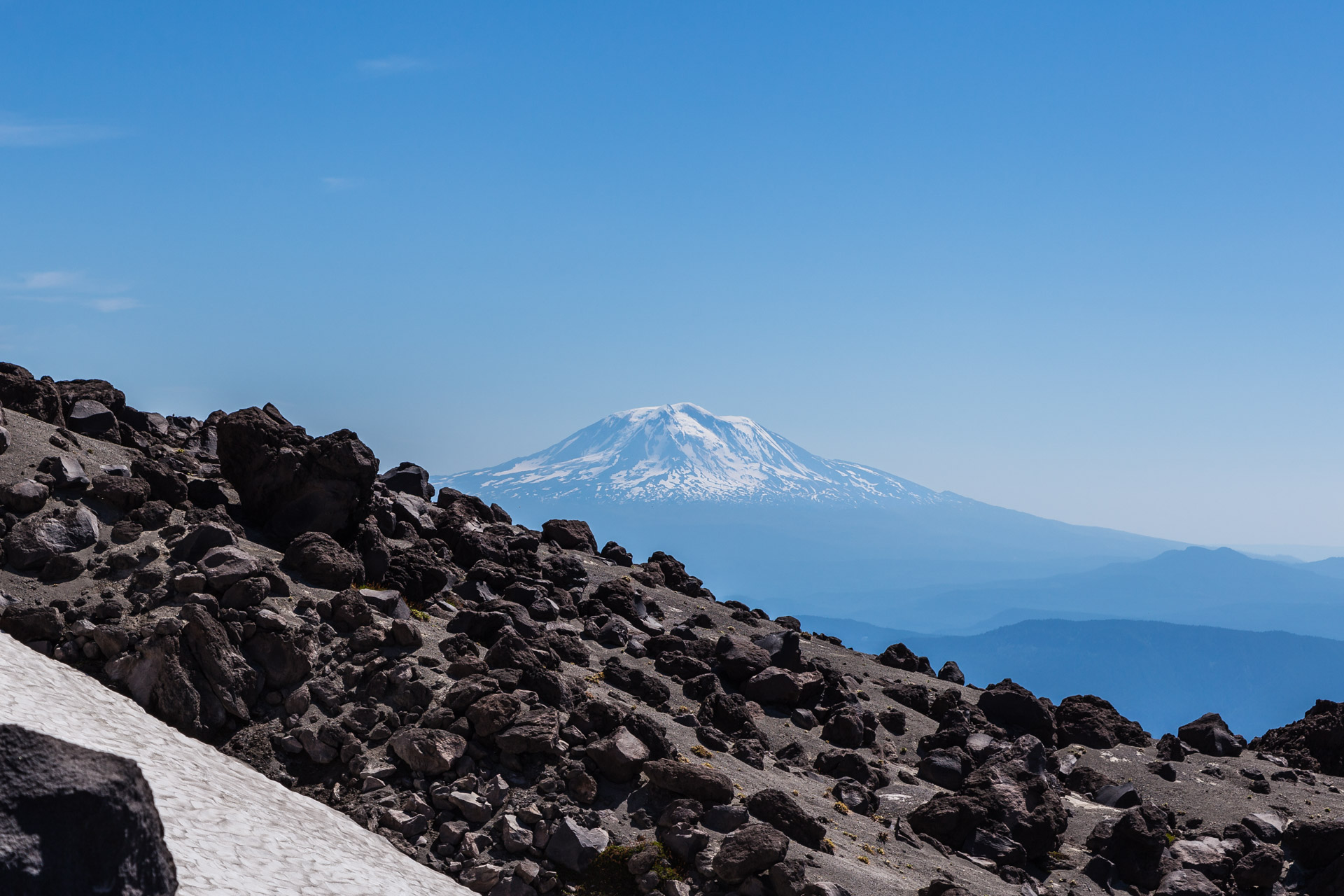 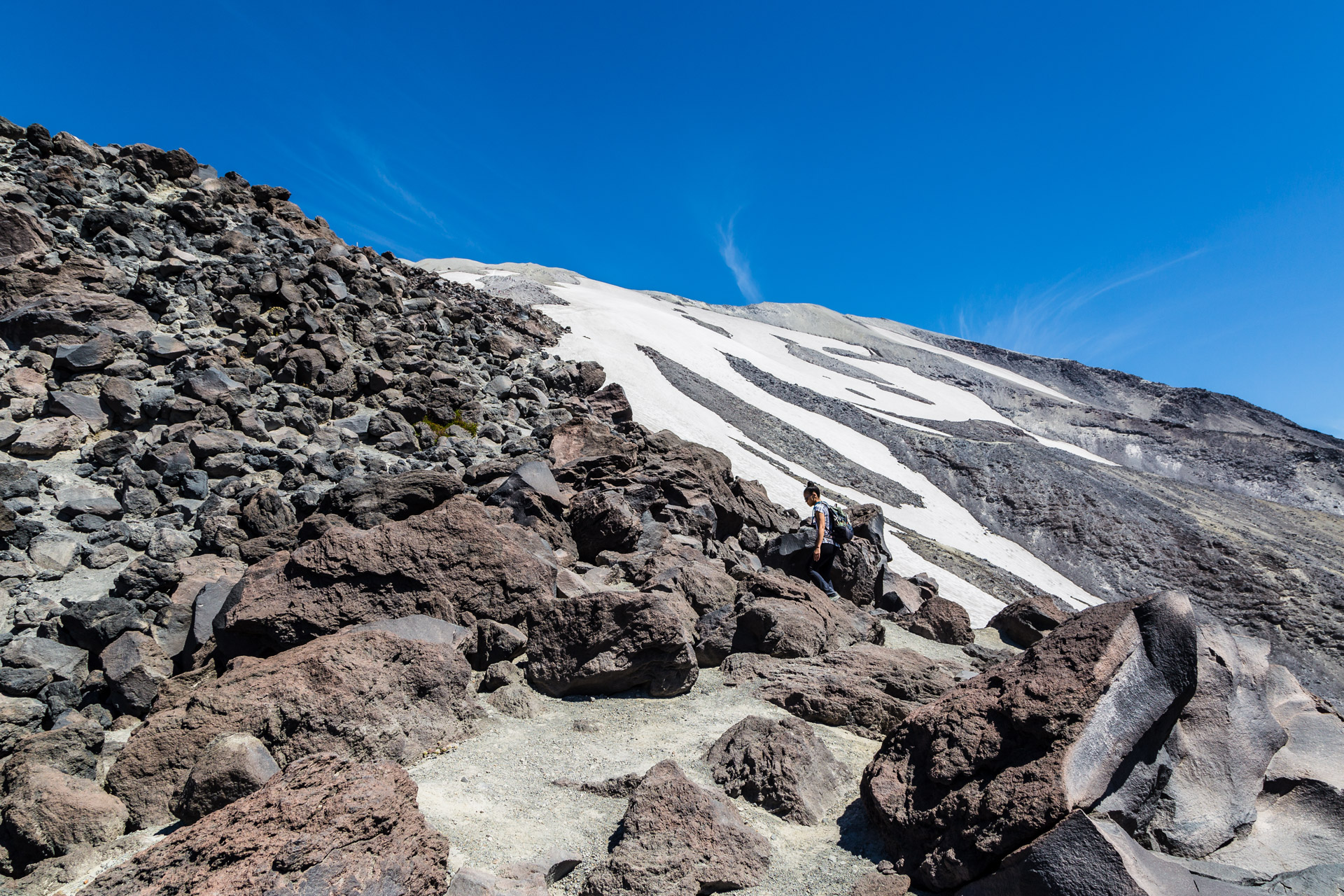 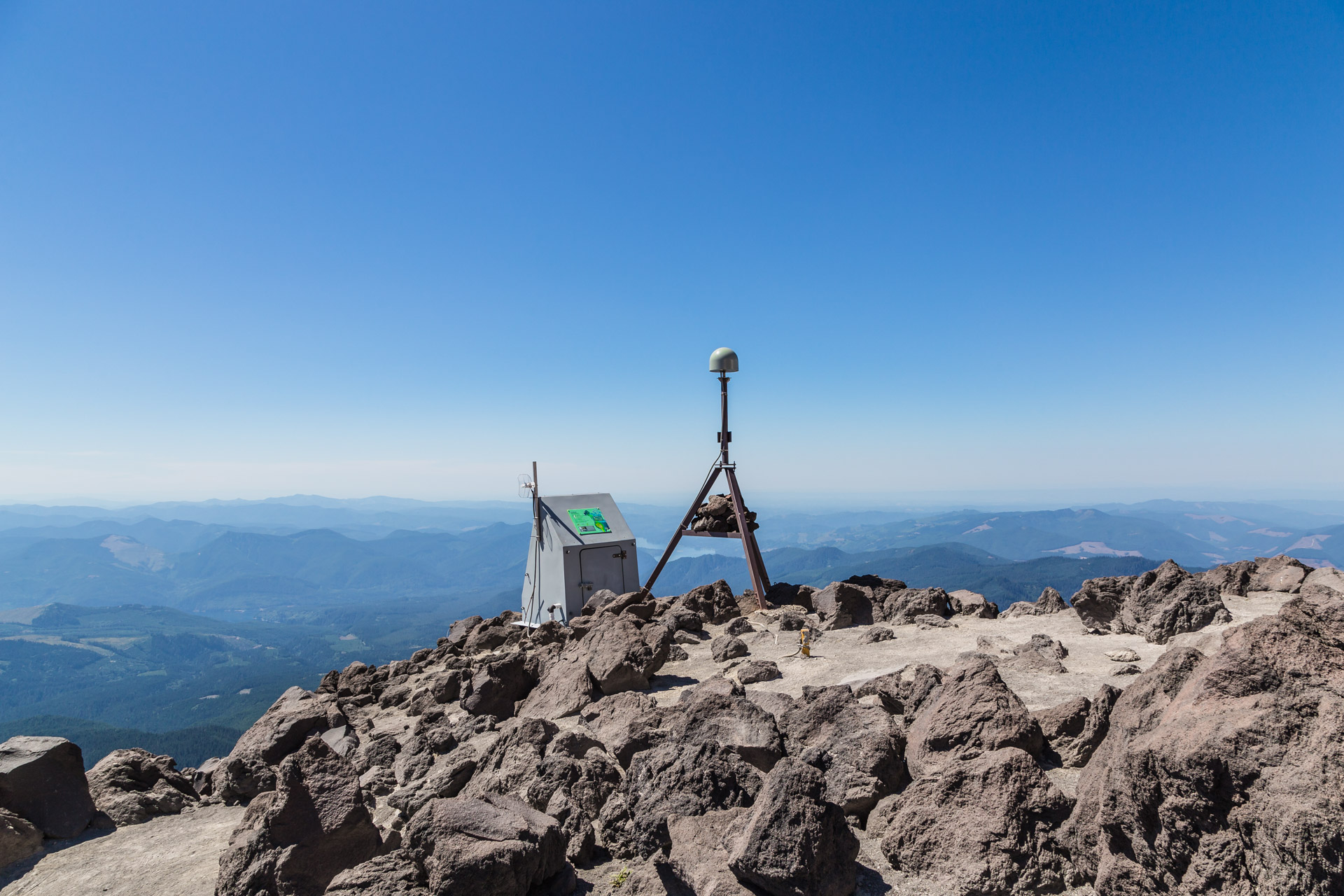 The last section of the trail requires a painfully slow climb up 1000 vertical feet through ash and small rocks to reach the crater rim. Many people describe this part as “two steps forward, one step back” because the ground is very loose like sand. We used trekking poles for this, and they helped a little bit…but after just doing the boulder fields we were struggling no matter what especially because we were feeling some of the high elevation as well. 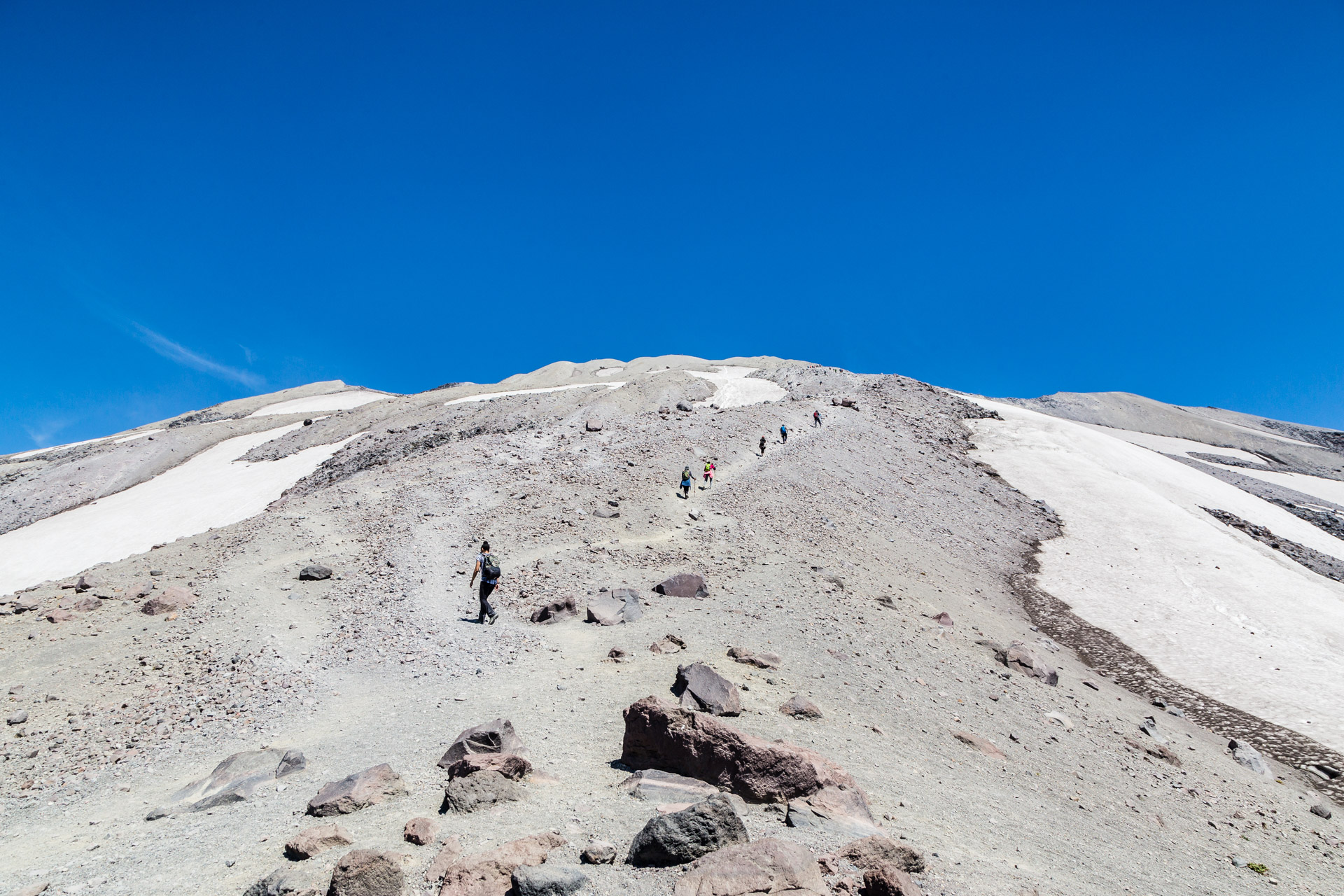 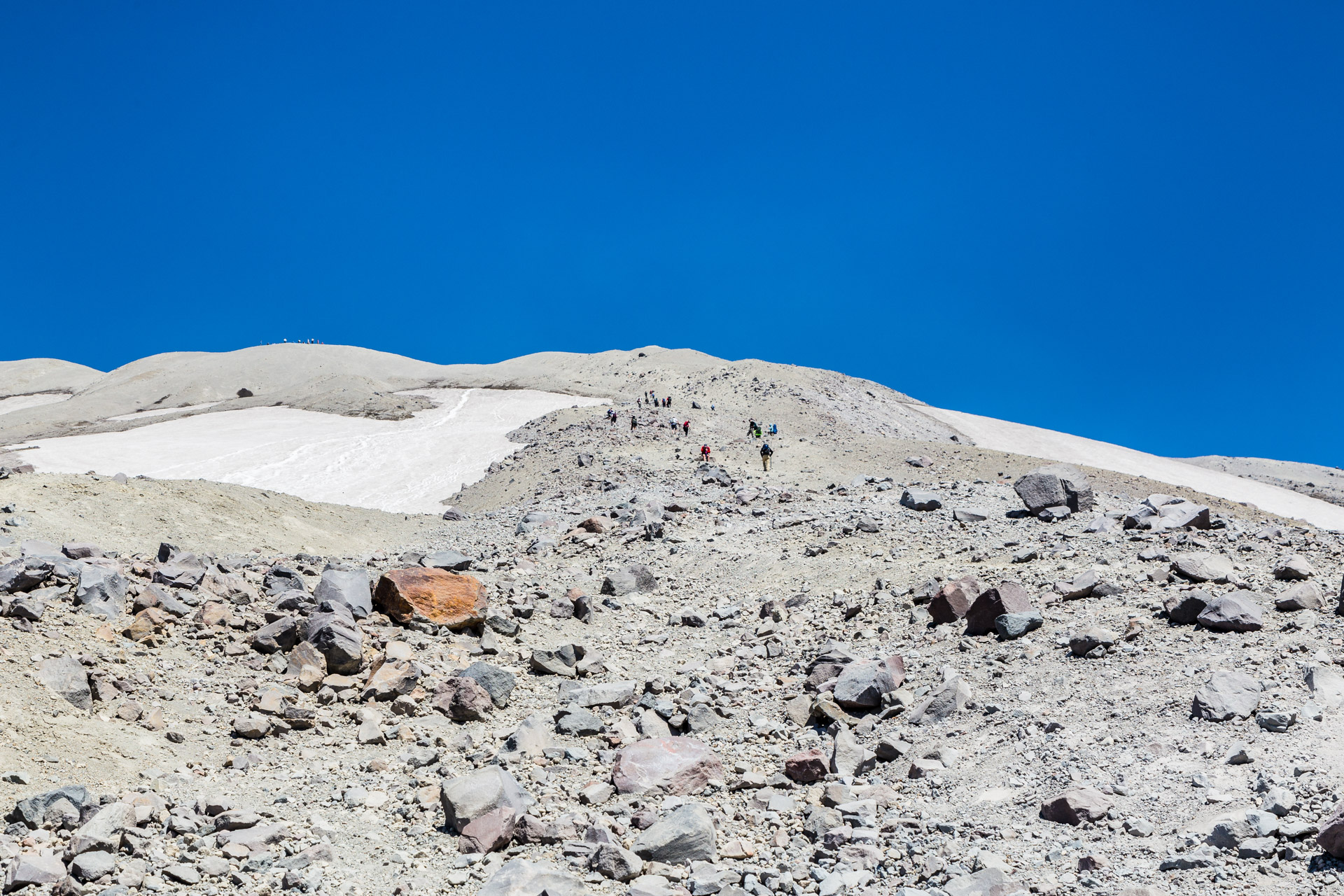 Luckily, we did make it to the top where we saw for ourselves what the inside of a volcano looks like after it had erupted. While staying a safe distance from the crater edge which is a cornice that can break off at any moment, we saw a large crater with a dome that is apparently still growing every year and the state’s newest glacier forming a horseshoe around it. The views around us were amazing with Mount Hood, Mount Rainier, and Mount Adams (all three volcanos as well) off in the hazy distance. We were even welcomed at the top by a whole bunch of butterflies…very random! 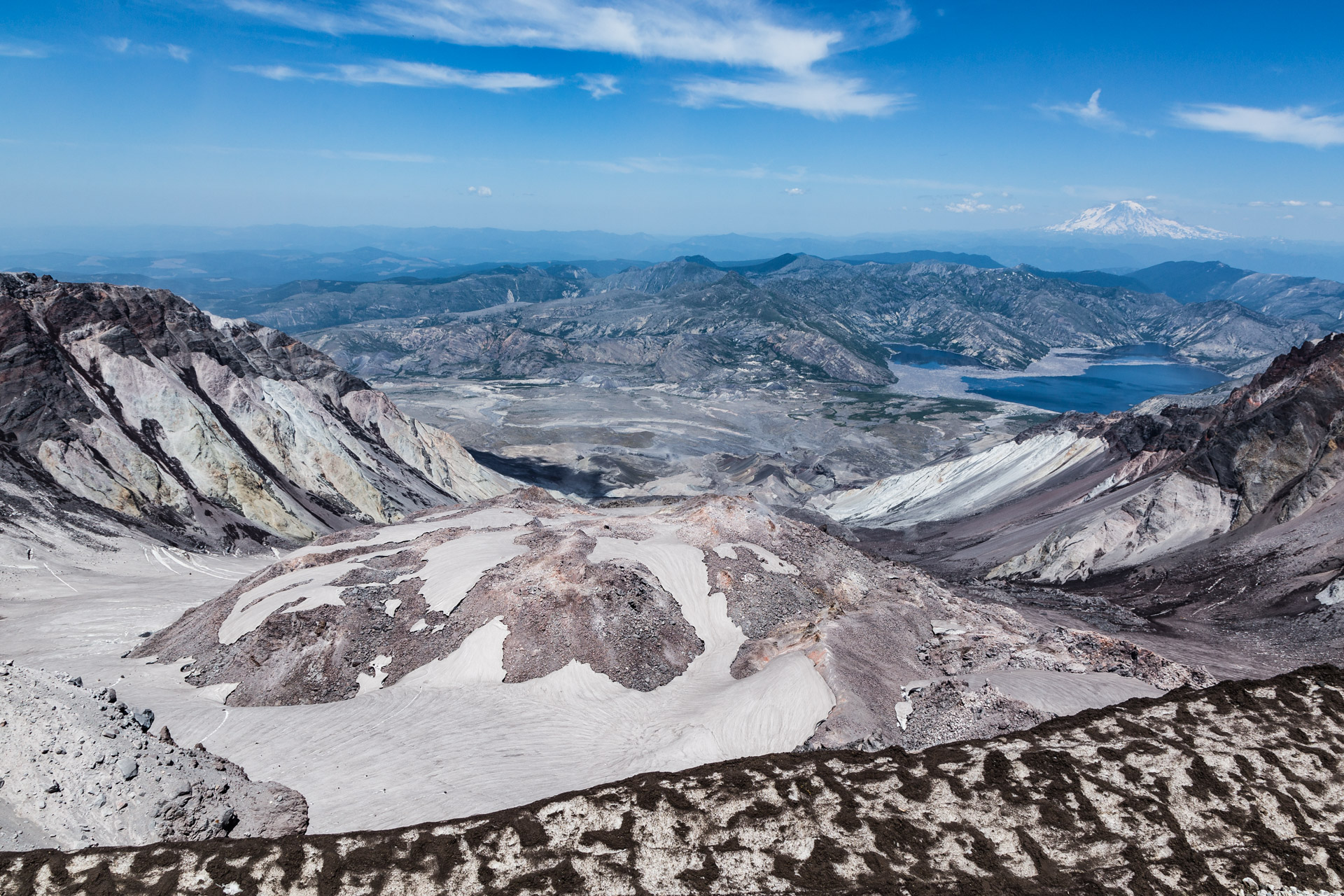 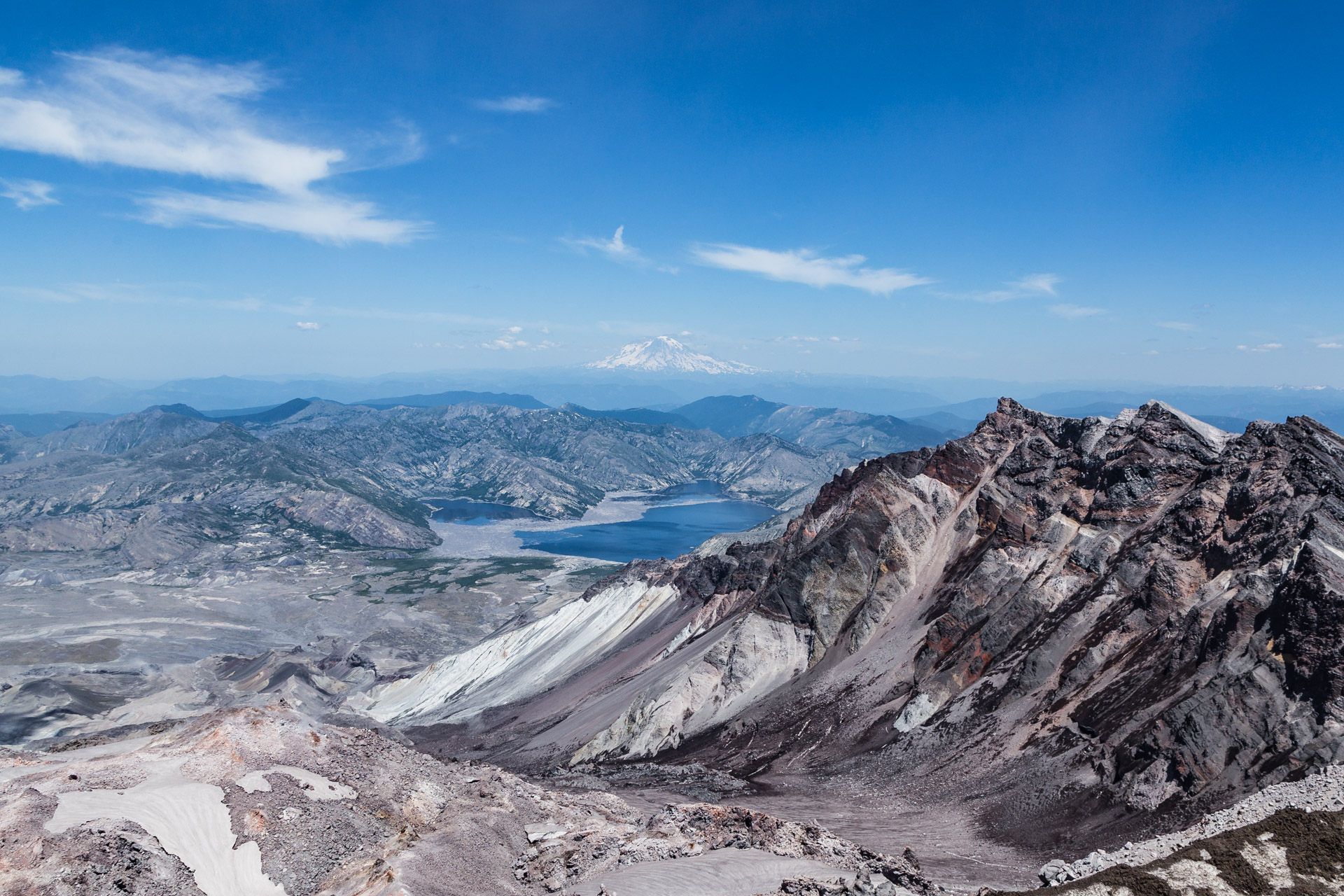 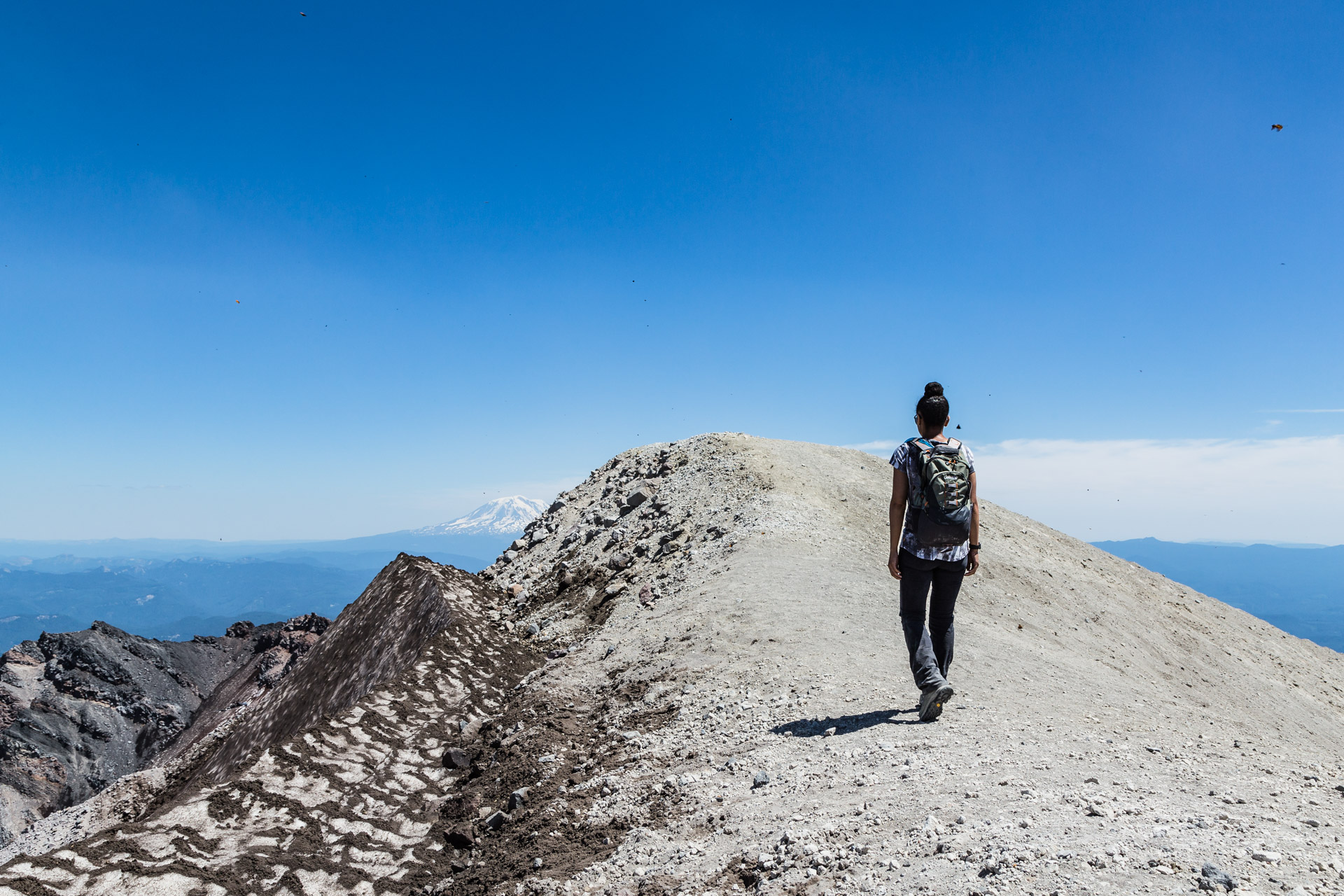 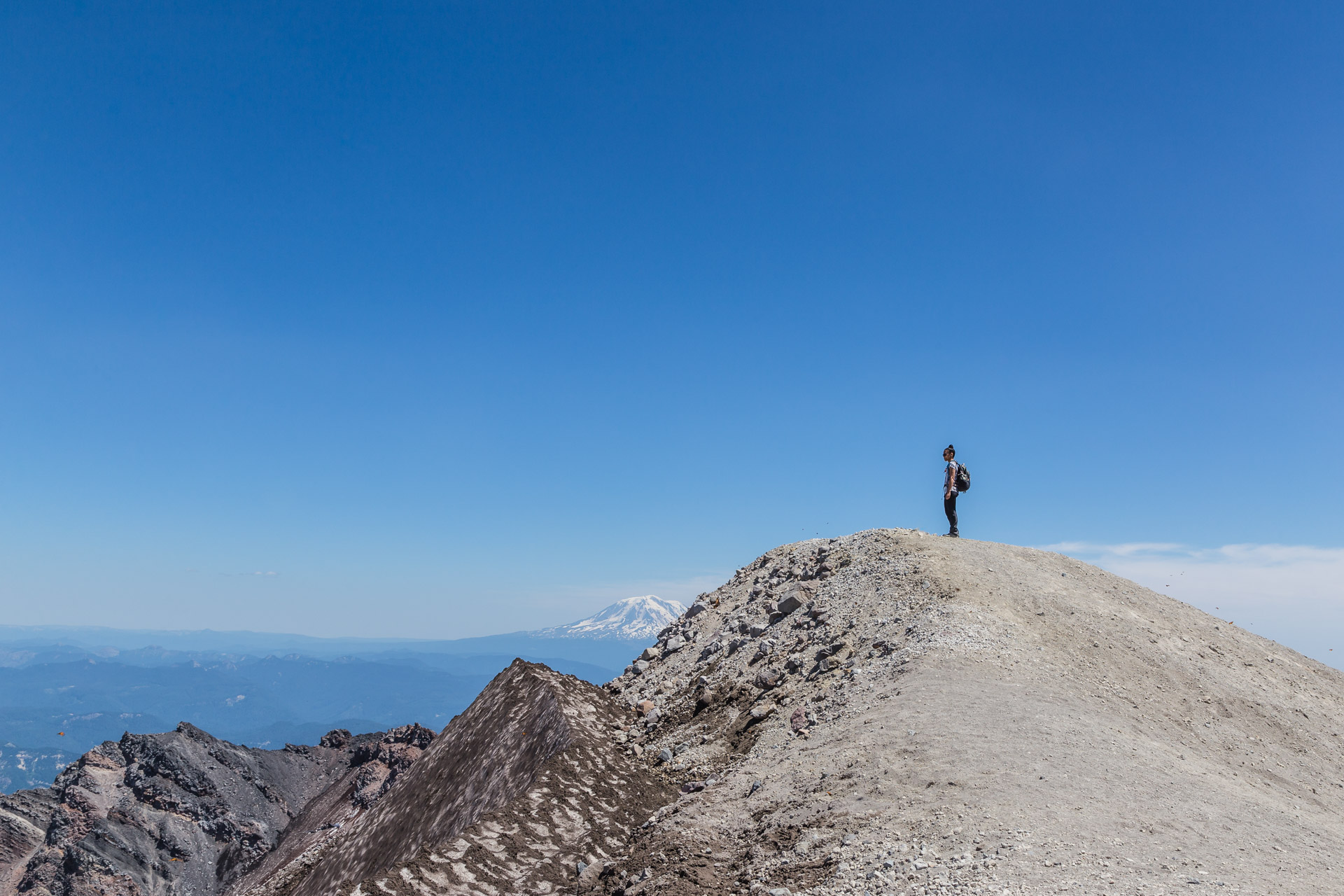 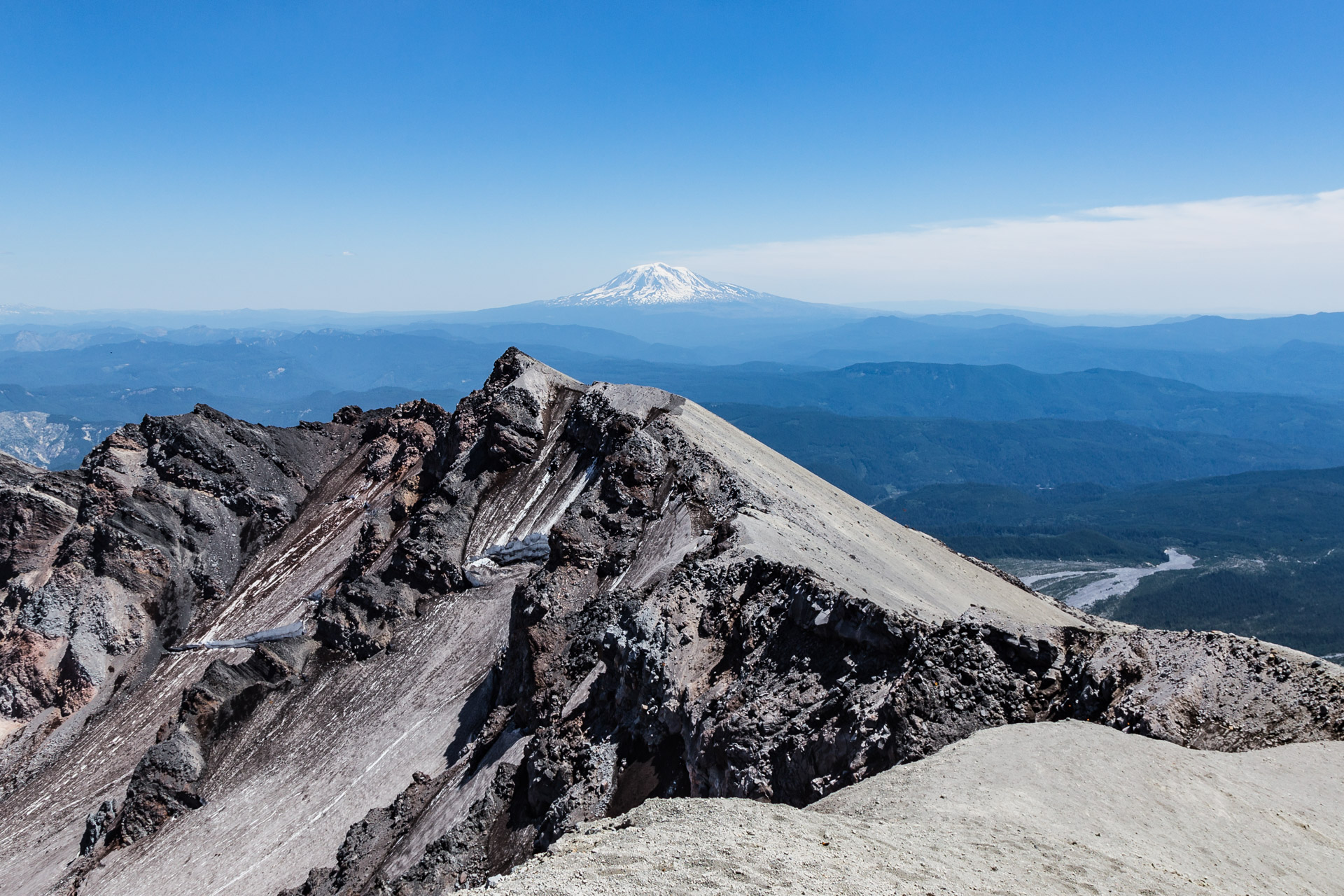 Now we didn’t stay up there for very long because the sun was beating down on us, and we were starting to run out of water (poor planning on our part). We still had to find our way back down. Some people like to glissade down using makeshift sleds to basically slide down the snowy areas of the mountain. It looked fun but super scary and dangerous, so we took the same way back down which was not amazing for our knees. We were beyond tired and dehydrated by the time we got back down to the car because the whole trip took us nine and half hours. We had originally thought the hike would take only six to seven hours (based on miles and not taking into account the difficult terrain) which is why we did end up running out of water completely when we were about two miles from the car. Also we suffered really severe sunburn because we didn’t apply sunscreen multiple times like we should have…an experience we don’t want to replicate ever again! Nonetheless, we definitely thought all the challenges we experienced were so worth it even if we consider this climb to be one of the most dangerous hikes we’ve ever done. In fact, we plan on making the trek again next year…just so we can prove to ourselves we can do it better! 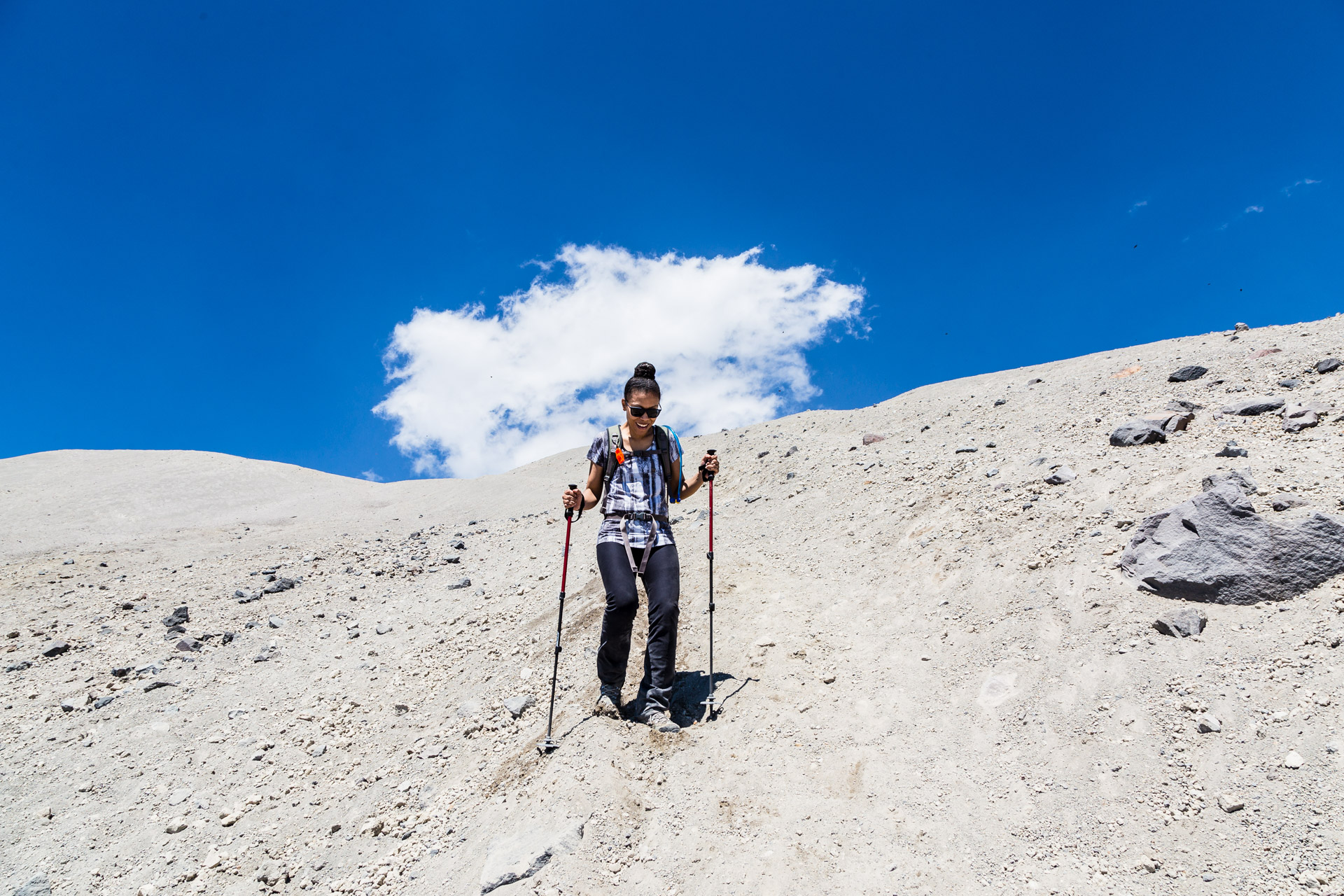 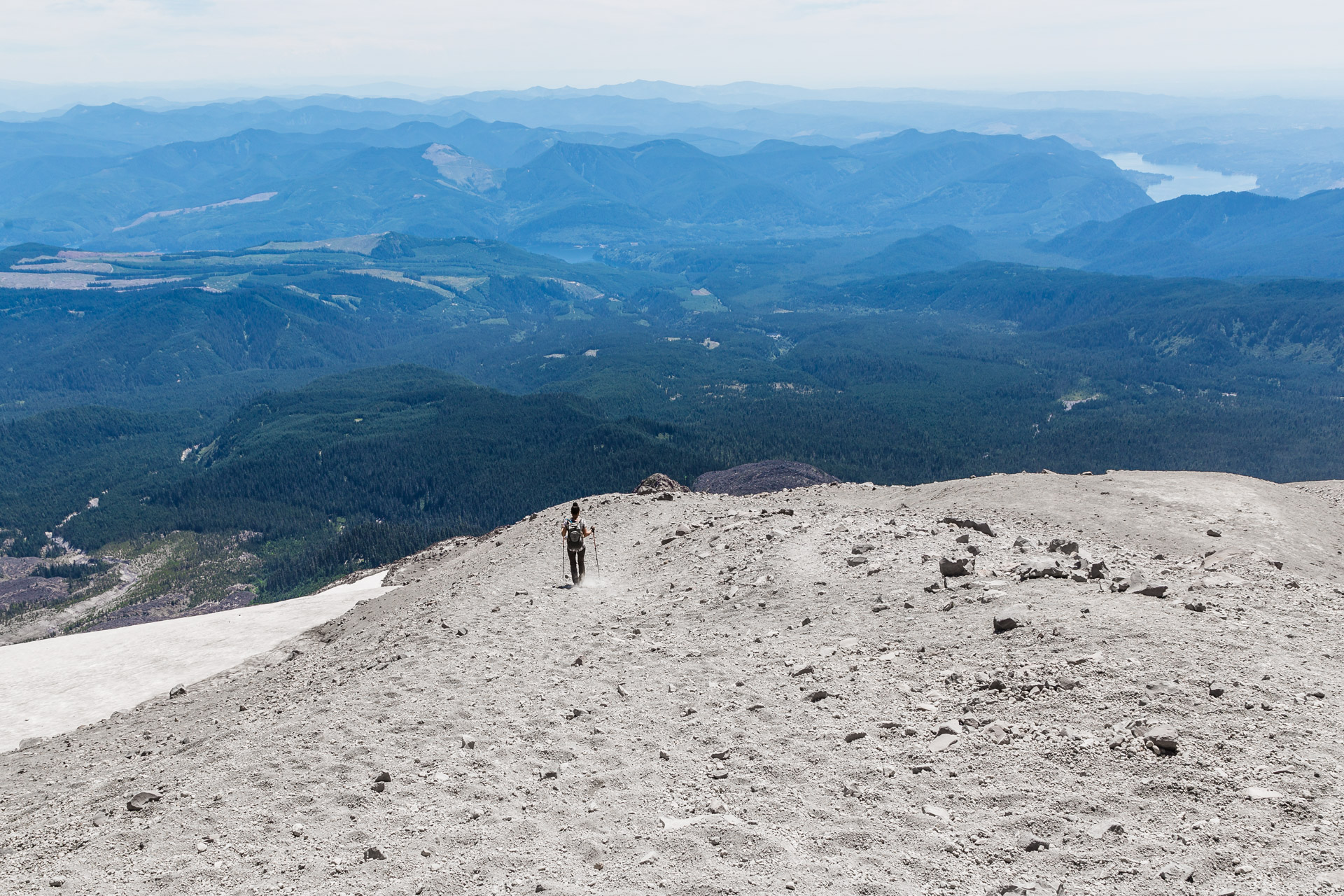 Hope you all have a wonderful week, and if you are interested in doing this climb…we highly recommend doing research ahead of time! Here are some links we suggest exploring: 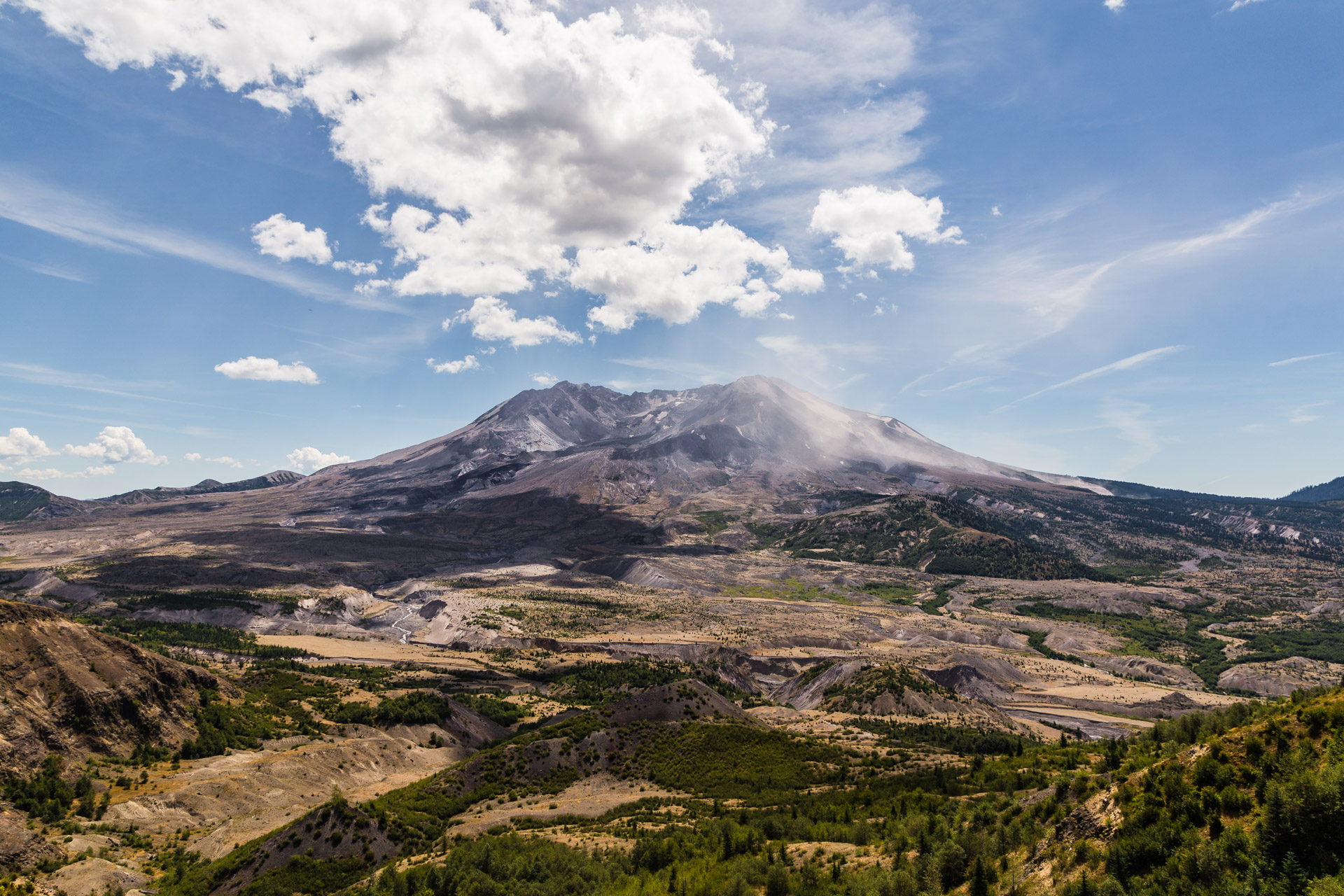 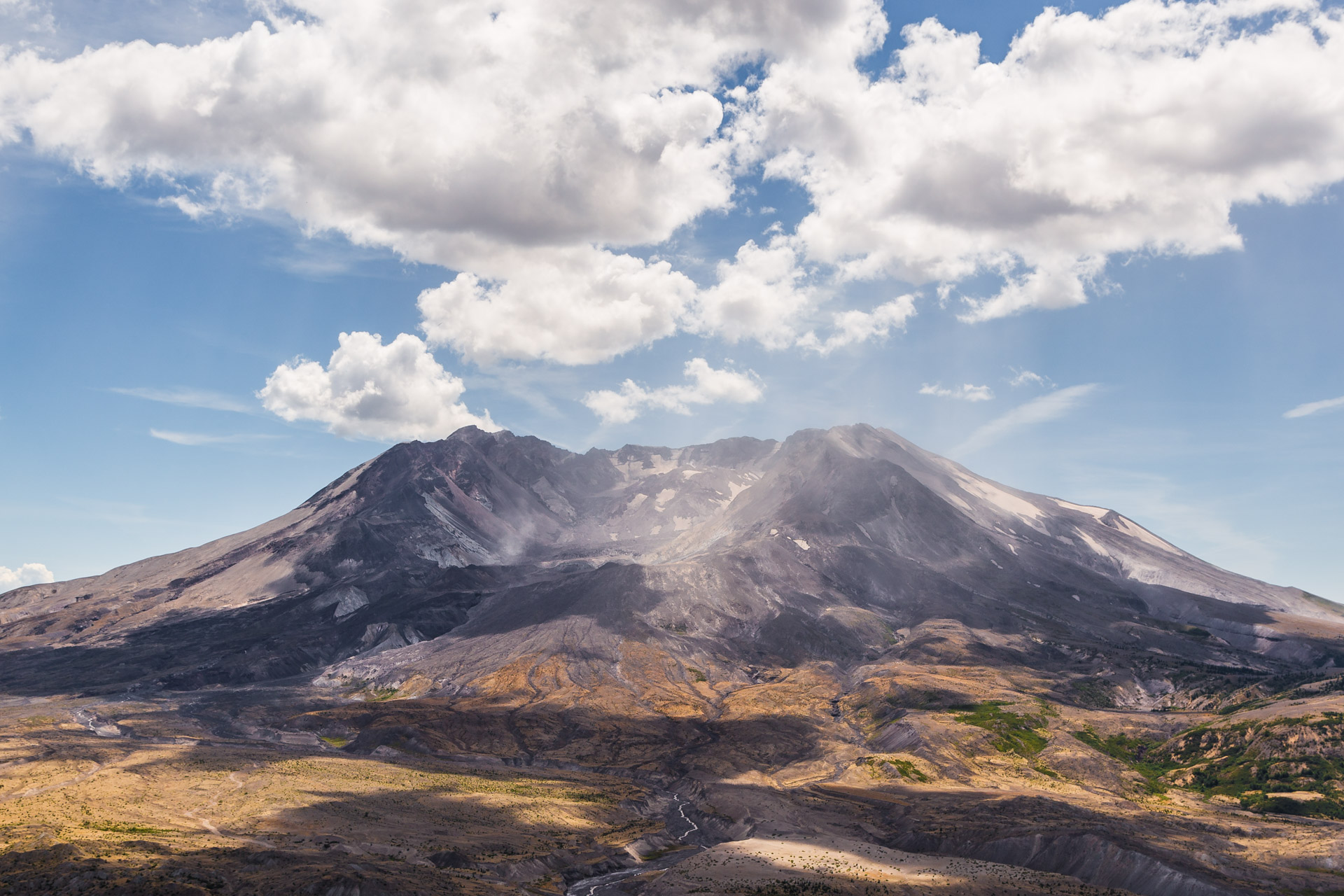 What do you think of this climb? Would you hike a volcano? Leave a comment…we would love to hear what you think!